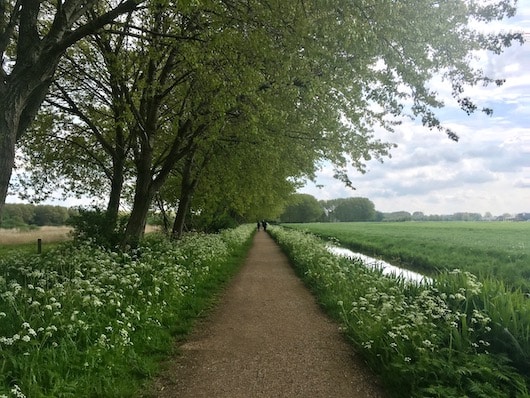 One of our favorite runs in Delft is to explore the series of parks, lakes, woods, and canal trails in eastern Delft. This includes the huge Delftse Houte area, which is a series of paths along canals and around a lake, extending east to Dobbeplas Lake.  We’ve created a route of up to 15k that includes the entire area —  use it as a guideline to create your own route.

Start at the Eastern Gate (Oostpoort) — it’s ~1.5 km along the canal and east along Bieslandsekade to the Arboretum. Loop around the lovely paths there, then head north into Delftse Houte. Enjoy the trail around the lake, and continue north to the paths in Hertenkamp (park), and up to the Brasserskade stadium, where there’s a running track. After this ~2.5 km loop, for a longer run you can continue east along through the Bieslandse Bos (park) for 1.5 km, where you can choose a more open path along a canal or more wooded paths through the woods. Do a loop around Dobbeplas Lake (~2 km), then head just south to return to Delftse Houte along paths through De Balij en het Bieslandse Bos.

Variation Options: There are many paths in this area to create your own route. For a shorter run, start in the Delftse Houte area, or eliminate the jaunt out to Dobbeplas.