No Thanks
Eugene, OR 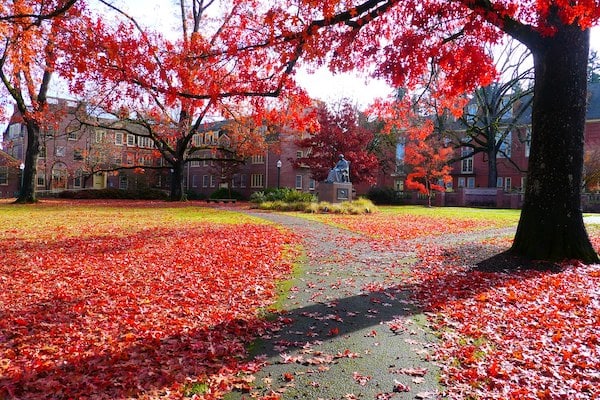 In addition to the numerous trail options in Eugene, there are some great neighborhoods for running, especially south and east of downtown. Run the University of Oregon campus, connect to the Amazon neighborhood, Rexius Trails, Hendricks Park, and Laurel Hill!

Amazon: This neighborhood the east of Amazon Park features grid-like streets, lined with modest but pretty homes and colorful leafy trees. Alder Street is a favorite, as are the numbered streets heading east from South Eugene High School (19th-23rd). Presents lots of opportunities to connect with the Adidas Oregon/Rexius Trails, and the University of Oregon campus. This MAP shows the border of the nicer streets.

University of Oregon: Though not particularly large, the U of O campus is surrounded by runner-friendly sidewalks. The square-shaped outline (MAP) of 13th Ave, Alder Street, 18th Ave, and Agate Street forms a roughly 2 mile loop with fairly easy access to the Amazon neighborhood and Hendricks Park (which sits between the Amazon and Laurel Hill neighborhoods). Note: the legendary Hayward Field was rebuilt and re-opened in 2021 as a major new Track & Field stadium and track, site of the Team USA Track & Field Trials. So far, it has not been generally opened to the public — a major bummer!

Laurel Hill: Understood to be one of the wealthiest neighborhoods in Eugene, the Laurel Hill area located southwest of downtown presents a nice opportunity for a residential neighborhood run on well-kept sidewalks bordering quiet streets. The south ends of Laurel Hill Drive and Brackenfern Boulevard are particularly nice. There are also some pleasantly challenging hills. You can find parking at Laurel Hill Park. MAP.

With over 14 miles of waterfront running along the Willamette River and its surrounding parks, the Ruth... more...

All Eugene, OR Routes