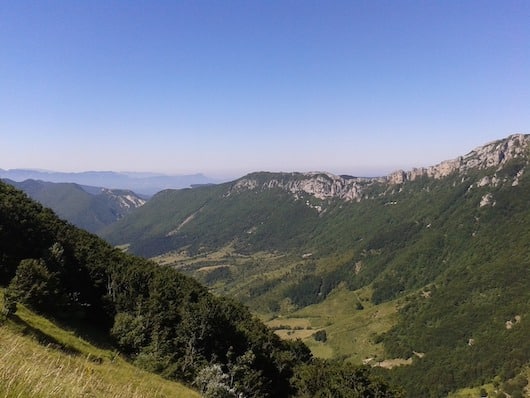 Grenoble lies at the foot of the French Alps. The area has a wealth of trail running options for runners of all abilities. Once outside of Grenoble it gets hilly quickly! While our guide is more focused on road running and gentler multi-use paths, the Grenoble Office of Tourism has put together a fantastic introduction to the trail running options right in Grenoble and in the nearby mountain areas of Chartreuse, Vercors, Frange Verte, and Vizille. Each of their 15 marked trail paths has a GPX file that can be downloaded. Most of these trails feature at least 200m of elevation gain with some challenging footing. Of the 15 routes listed, the easiest ones for trail running are:

Les Hameaux de Vizille. 10.3 km, 179m gain. Note the first 5 km are fairly flat along an easy path called the Chemin des Vignes which takes you to Vaulnaveys-le-Baso. You could do this section there and back, or conquer the whole thing with most of the elevation at the back half.  ROUTE MAP

Frange Verte -The pond of Haute-Jarrie. 8 km, 221m gain. Starting at Frange Verte Park, the first 1 km is easy, then it’s a 200m steep climb over 1.5 km to a plateau with great views of the surrounding mountains and the Etang de Haute Jarrie regional nature reserve. The descent is through a pretty forest. ROUTE MAP

This is an easy-to-follow 7.5 km 'runseeing' tour of the central, historic part of Grenoble, featuring Paul... more...