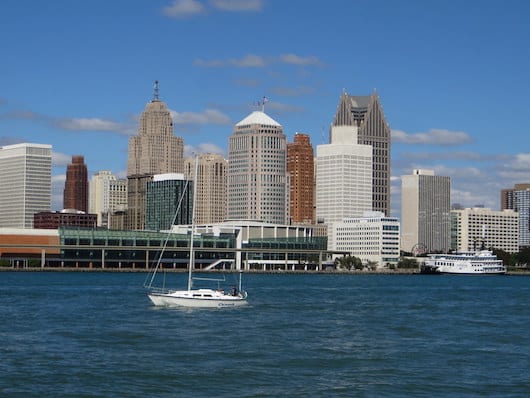 The largest city in Michigan, Detroit is locate on the Detroit River, which connects Lake St. Clair and Lake Huron to the north, and Lake Erie to the South. Detroit is also across the river from Windsor, Ontario. The famed ‘Motor City’ has had its ups and downs, but the downtown scene is steadily revitalizing. Our guide for running in Detroit includes some terrific routes downtown showcasing the waterfront. In the northern and western suburbs, which are the location of numerous corporate offices and lovely residential areas, there are extensive parks and multi-use trails. See also our running guides for nearby Ann Arbor and Windsor, ON.

The best places to run Detroit’s downtown area include the Riverwalk Trail and the Dequindre Cut Greenway, which is a nice add-on to the Riverwalk. Our friends at RunDetroit have put together a couple of great downtown running tours. Another great place to run is Bell Isle. For lovely waterfront and residential running in a classic suburb, head to Grosse Pointe. Just west of the city, we love running in River Rouge Park and on the Hines Park Trail that starts in Dearborn (Ford-land).  We’ve also put together several routes in the area bound by I-275 west of the city, stretching from Huron Township north to Novi, including the area around Wayne County Airport. There are also wonderful parks, multi-use trails, and residential neighborhoods for running in the northern suburbs, centered in Bloomfield, Pontiac & Rochester. For a destination run, head to Kensington MetroPark & the adjacent Island Lake Recreation Area.

Some of our favorite runs in Detroit, MI 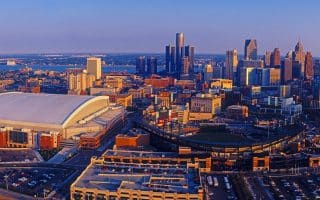 A 6-mile and 10-mile loop of Detroit’s highlights, put together by the folks at Run Detroit.
Explore 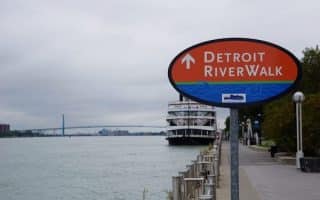 The signature running route in Detroit, ~5 miles along the water and accessible from downtown hotels. Parallels Atwater Ave. for most of way. Can add on with the Dequindre Cut Greenway at Milliken State Park.
Explore 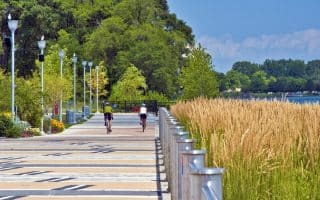 A great off-road running option in downtown Detroit, this ~2 mile greenway runs from Atwater Ave. to Mack Ave., following a former railroad line. A unique feature is a series of 16 murals along the way. Good add-on to Riverwalk path.
Explore 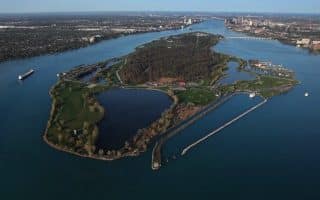 Olmsted-designed park on an island in the middle of the Detroit River, with views of the Detroit skyline & the Windsor shore. Great paths for running, including 6-mile perimeter road.
Explore 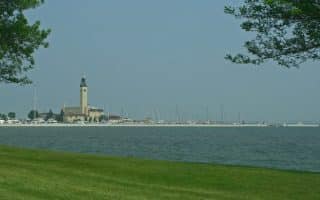 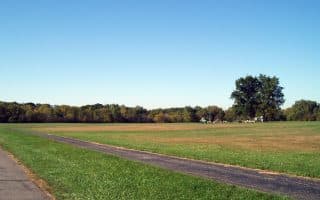 Detroit’s largest park at 1181 acres, about 14 miles west of the city, near Dearborn. 7 miles of paved trails. There’s a good 5 mile loop.
Explore 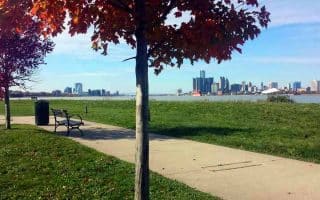 Windsor is 2 miles across the river from Detroit. Great waterfront running through beautiful parks, with interesting sites and skyline/water views.
Explore 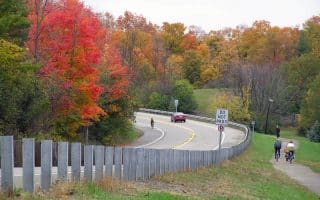 For travelers in the Dearborn (Ford HQ) and Northville areas, there are good opportunities for running. The Hines Park Trail is a paved path between Dearborn and Northville.
Explore 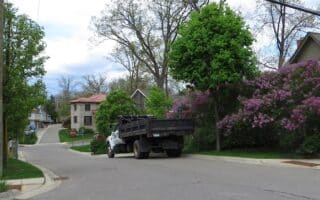 See auto exec mansions along the winding country lanes of Bloomfield Hills, north of Detroit. Combine with the adjacent Birmingham neighborhood, which has leafy streets and attractive homes.
Explore 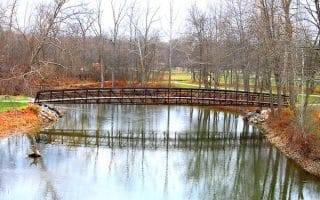 The best places to run in Detroit’s major western suburbs off I-275, from Huron Township near the Airport north to Northville. The highlight is the linear park from Lower Huron MetroPark to Oakwoods MetroPark. The I-275 Metro Trail is a good anchor.
Explore 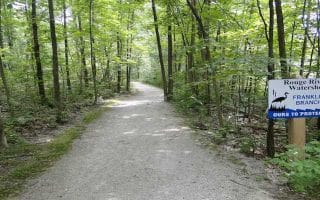 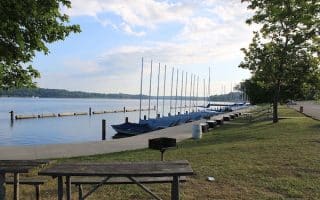 The signature running route in Detroit, ~5 miles along the water and accessible from downtown hotels. Parallels Atwater Ave. for most of way. Can add on with the Dequindre Cut Greenway at Milliken State Park.
Explore

Olmsted-designed park on an island in the middle of the Detroit River, with views of the Detroit skyline & the Windsor shore. Great paths for running, including 6-mile perimeter road.
Explore

Detroit weather is typical of midwest cities such as Pittsburgh and Cleveland. Cold winters, with moderate amounts of snow, and warm, hot, and fairly humid summers. There is a good cluster of hotels downtown, in the area bound by I-375 to the east and Highway 10 the west, and I-75 to the north. They are all within 1–2 miles of the Riverwalk path, which is the best running option downtown right from your hotel. There are also hotel clusters in and near Dearborn (Ford HQ) to the east, in the Novi/Northfield and Southfield/Farmington Hills areas to the northeast, and Warren/Royal Oak to the north (GM Tech Ctr.).

RunDetroit is the main indy running store downtown. They are in midtown, near Wayne State Univ. and the Detroit Institute for the Arts. Thanks to Eric for his help!   Group runs Saturday 8am, with 3–6–10 mile options.

Downtown Runners (group, not store), meet every Tuesday 5:45pm for a walk or run. Schedule

Hansons Running Shop. Great local chain, very involved in the running community. Many thanks to Tom for his help!  Group Runs Tuesday 6pm.

The Running Factory. Store is about 1 mile from the riverfront trails.

Turkey Trot. One of the biggest Thanksgiving Day races in the country

Hightale to Ale 5k. A fun event co-sponsored by Atwater Brewing Co. and Running Fit. May.