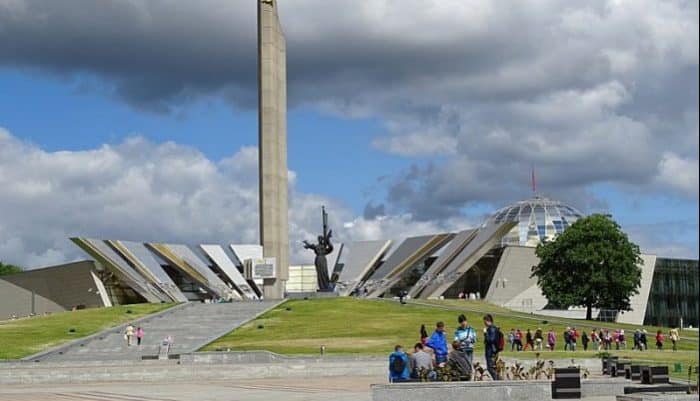 Although Victory Park is located along the Svislach River and its Velodorozhka, this large green space is worth noting separately for its many intertwining paths. The park encompasses the striking architecture of the Belarusian State Museum of the History of the Great Patriotic War as well as numerous gardens, fountains, waterfront views, and pristine stone paved paths. Create your own route or use our mapped ~7 km loop around the entire park. If you prefer to run with company, Runday hosts a free 5k race in Victory Park every Saturday. The race starts at 9 am April-October and 10 am November-March. Group warmups take place 30 minutes before the race.

Mapped Loop: Starting from the Belarusian State Museum of the History of the Great Patriotic War, head east along the 1st Ring Road, turn LEFT along the Svislach, cross the river, and then turn LEFT to follow the waterfront north. At the 2nd Ring Road, cross back over the river and head south along the waterfront back to the museum. There are lots of other paths in the park, so if you desire a shorter route, the southern corner of the park is a good place to start.

See the best of Minsk on this ~7 km “runseeing” tour through downtown, covering some of the... more...