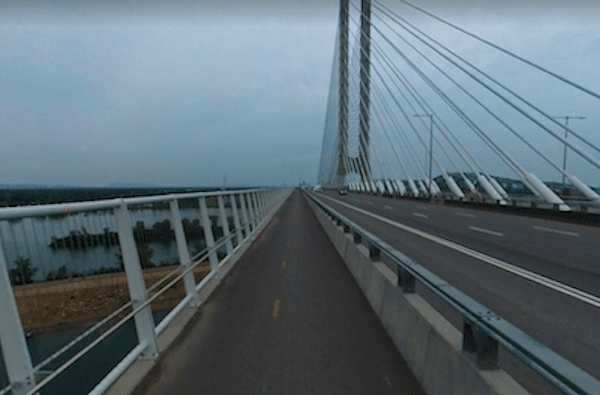 There’s wonderful running on special bike paths above and along the St. Lawrence River, incorporating the Champlain Bridge, the Ice Control bike path, and the Petite Voie du Fleuve (voie=path). These can be run standalone or mixed in various ways.

Champlain Bridge Multi-Use Path. The Champlain Bridge, which connects the Island of Montreal to the south shore, offers a unique running experience. The bridge was opened in 2019, replacing the original Champlain Bridge, which was built in 1962. Fortunately for bikers and pedestrians, the bridge was built with a 3.4 km multi-use pathway, which offers great views of the St. Lawrence River and the Montreal skyline. There are two access points: from Nun’s Island, and from Brossard. The bridge path itself is 3.4 km, but it’s 5 km between the two access points. MAP

Ice Control Structure/ Petite Voie du Fleuve Bike Paths. OK, so this is probably the only run in the world that’s a multi-use path literally on an ice control structure. An ‘ice control boom’ was built on the river as a way to enable shipping for more months of the year. The paved Ice Control Structure Bridge bike path runs alongside the bridge, connecting Nun’s Island to the Estacade Du Pont Champlain cycle park. Then, the Petite Voie du Fleuve  bike path continues north to the Victoria Bridge and south to Sainte Catherine. There are great views of the river and the Montreal skyline.

Point to point, the Ice Control Structure path is 2.3 km, so 4.6 km out and back. There are great water views. Note: it’s exposed and can be windy. From the Estacade Du Pont Champlain cycle park, you can continue north on the Petite Voie du Fleuve bike path to the Victoria Bridge (gravel surface, 6 km one-way). Headed south, the wide, paved path goes for 11 km (paved surface) to Recre-O-Parc.  The path is tree-lined, with glimpses of the water — it’s a bit monotonous. At Recre-O-Parc, there are additional paths and great water/skyline views (one can also drive there via Sainte Catherine, where there’s a lock one can cross to access the town).

Add-Ons: At the Victoria Bridge, connections to our St. Helen’s Island route. See also our routes on Nun’s Island.

Wonderful running options on this island that sits between the city of Montreal and the South Shore.... more...