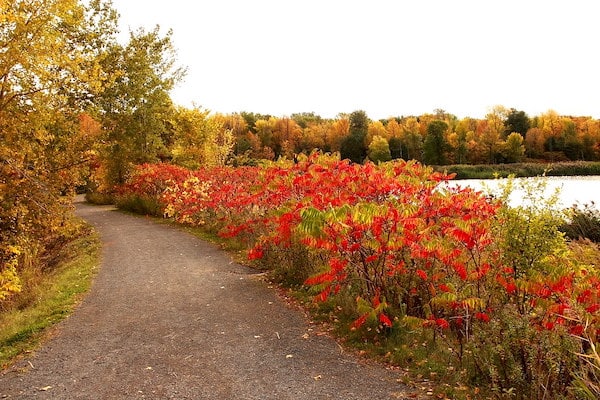 Nun’s Island is a residential and recreational community that sits between the island of Montreal and the city’s south shore. Steps away from the city via a dedicated bridge (which also features a dedicated pedestrian walkway), Nun’s Island anchors some nice running options. There are numerous parks, and paved multi-use paths circle much of the island. They’re pleasantly shaded, with some views of the St. Lawrence River and the Montreal skyline. Some of our favorite options for running on Nun’s Island, which can be combined in various ways:

Nun’s Island Waterfront Path. Although there isn’t a path around the entire perimeter of Nun’s Island, there’s a great run starting at Lacoursière Park, then heading over to the waterfront on Chem. du Golf, then along the west side of the island for 3.5 km to the end of L’Orée-du-Fleuve Park. It’s 9.5 km out and back. Great water and city views, and nice parks. ROUTE MAP

For longer, one can also head north from Lacoursière Park for 3.4 km on a waterside path to Esplanade de la Pointe Nord. Connections there to the Champlain Bridge multi-use path. ROUTE MAP

Nun’s Island to Verdun. Another pleasant and scenic running option from Nun’s Island is to the take the Nun’s Island bridge toward Montreal, and then run along the Lachine Rapids path in Verdun through a series of waterfront parks, as far as Des Rapides Park. Up to 8.6 km one-way. ROUTE MAP

Ice Control Structure/ Petite Voie du Fleuve Bike Paths. OK, so this is probably the only run in the world that’s a multi-use path literally on an ice control structure. An ‘ice control boom’ was built on the river as a way to enable shipping for more months of the year. The paved Ice Control Structure Bridge bike path runs for 2.3 km alongside the bridge, connecting the east side of Nun’s Island to the Estacade Du Pont Champlain cycle park. Then, the Petite Voie du Fleuve bike path continues north on a gravel surface for 6 km to the Victoria Bridge. Headed south, the wide, paved path goes for 11 km (paved surface) to Recre-O-Parc.  The path is tree-lined, with glimpses of the water — it’s a bit monotonous. At Recre-O-Parc,  there are additional paths and great water/skyline views (one can also drive there via Sainte Catherine, where there’s a lock one can cross to access the town.

Champlain Bridge Multi-Use Path. The Champlain Bridge, which connects the Island of Montreal to the south shore, offers a unique running experience. The bridge was opened in 2019, replacing the original Champlain Bridge, which was built in 1962. Fortunately for bikers and pedestrians, the bridge was built with a 3.4 km multi-use pathway, which offers great views of the St. Lawrence River and the Montreal skyline. From the Nun’s Island access point at the Claude-Robutel roundabout, it’s 5 km to the Brossard access point across the bridge. MAP