No Thanks
Niagara Falls, NY 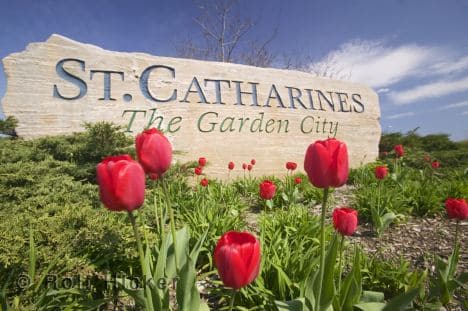 Situated on Lake Ontario, St. Catharines is the largest city in the Niagara region, with a population of just over 100,000. Given its official nickname of  “The Garden City” due to its 1,000 acres of parks, gardens and trails, there are some lovely spots for running in St. Catharines. Our recommendations

Merritt Trail. Starting downtown near Montebello Park, the Merritt Trail runs for 6 km along a canal and through several parks and gardens. The first 1.5 km is a bit industrial and mixed with the tangle of Highway 406, so one option is to start in Centennial Gardens and enjoy some lovely running heading south along this linear park. Add another 1-2 km in Clifford’s Creek Park. MAP

The Twelve Trail. Starting downtown and intersecting with the Merritt Trail, this pleasant, gravel trail runs for ~5 km one-way along the east side Twelve Mile Creek, to the campus of Brock University. There, you can connect with the Bruce Trail and head into the Glenridge Quarry for a longer run. The Participark Trail runs along the western side of Twelve Mile Creek. MAP

Bruce Trail/Brock University/ Glenridge Quarry. Lovely running and a nice series of trails in this area. From the end of the Twelve Trail, the Bruce Trail skirts the northern part of Brock University for ~2 km toward The Glenridge Quarry, whcih is a recreational facility built on a  former landfill. A loop around its trails is ~2 km. The campus of Brock University is pleasant for running. At its eastern end,  there are all sorts of trails around Lake Moodie. For some good trail running, head into Short Hills Provincial Park. MAP

The classic Niagara Falls run, this one on the U.S. side. The highlight is from the Aquarium... more...

The classic Niagara Falls run, located on the Canada side. A wonderful path starts near Rainbow Bridge,... more...