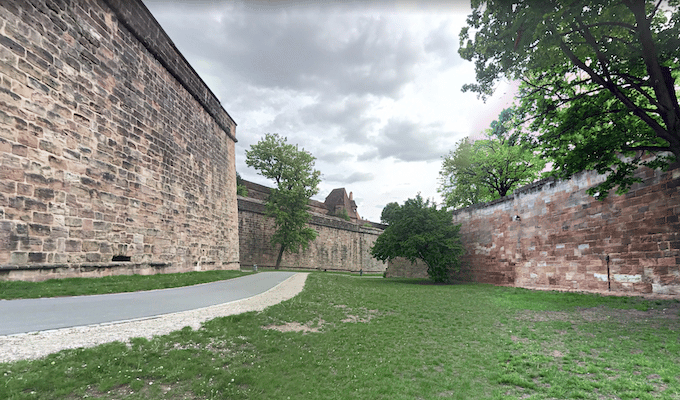 This is a fun run and a good way to get a sense of Nuremberg and its history. A green strip, sort of a narrow linear park, follows Nuremberg’s former city walls, with some sections still intact. The wall encircles Nuremberg’s two old towns: Altstadt-Sankt Lorenz & Sankt Sebal (Mitte). There’s a dedicated pedestrian path along a good portion of the 5.6 km loop.

Our route starts with the Burggraben path, in the Mitte section with numerous landmarks, including the Fünfeckturm & Imperial Castle. Follow the Burggraben, continuing south onto the Westtorgraben. This 3 km section is the best part of the loop, passing numerous towers, to the Frauentor (classic fort/drawbridge) and the Handwerkerhof, a medieval shopping area. From there, it’s a ~1 km section along roads, with a dedicated path picking up again just north of the Wöhrder Wiese transit stop.

Old Town Add-On: Using the City Walls green strip as an anchor, it’s fun to create your own route through the streets of Nuremberg’s two old towns, Altstadt-Sankt Lorenz & Sankt Sebal. Largely pedestrianized, they lie on either side of the Peglitz River, connected by scenic, historic bridges: Maxbrücke, Feischbrücke, & Museumsbrücke. In Altstadt, be sure to include Karolinenstraße.

Add-Ons: This path can be an anchor to join our other routes in Nuremberg: the Pegnitz River path at the Kettensteg bridge and the Wöhrder See lake loop at the Wöhrder Wiese transit station. Also worth a detour are paths in Rosenaupark and Cramer-Klett Park.