No Thanks
Peniche, Portugal 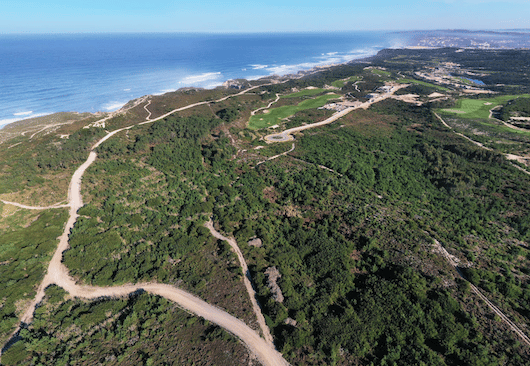 One of the treats of running in Peniche is the series of trails along the coastal bluff overlooking the ocean. Runners can wind their way along these trails, enjoying the reddish rock and open terrain while viewing the ocean below. There are a couple of sections of these trails. Note they’re difficult to map and are not particularly well-marked.

Alongside the Peniche Coastal Loop. Along part of the N114 Estr. Marginal, there are some coastal bluff trails next to the road. Note there are numerous rocks – running it is sort of like fun obstacle course!  The section between Miradouro De Remédios and Varanda de Pilatos is scenic but rocky. The section between the Lighthouse and Praia do Portinho da Areia Sul (Carreiro de Furninha) on the southern end of the loop has wider trails with better footing. Can be combined with the coastal loop route.

Above Baleal Beach. Some coastal bluff trails and dirt farm roads, for ~5 km north to the golf course. Can combine with beach running.

North of Praia d’El Rei. A series of coastal bluff paths and dirt farm roads make for some scenic running. Can go for ~5 km as far north as Bom Sucesso Beach. Can combine with beach running. Park at Parque de Estacionamento.

This 11 km loop of the peninsula above the water has great views, several observation decks, a... more...