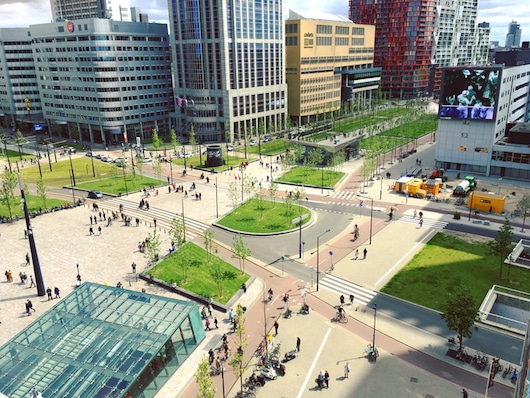 Rotterdam is a lovely city but with all the waterways and older streets, the geography is a bit complex to map out a ‘standard’ tour of the city centre. Instead, we’ve put together a map of central Rotterdam, suggesting a few good running options — several of which can be blended together:

Canalside Running. There are some nice roads/paths along inland canals. Run for ~2 km one-way along the Heemraadspark linear park. Can go as far as Sports Complex, where there’s a great outdoor track.  Also nice running nearby along the Coolhaven canal, along the Aelbrechtskade or the Spangesekade. These two canalside runs can be combined!

Het Park. Beautiful, landscaped park 1.5 km west of the Erasmus Bridge. There are 3-4 km of lovely walking paths. Combine with some waterside running east or west of there (see our routes).

Kralingse Lake. Just 3 km east of the center, enjoy a nearly perfect 5k run on the path around the perimeter of this pleasant lake. Water views much of the way. Only 0.5 km from the Voorschoterlaan metro stop. MAP