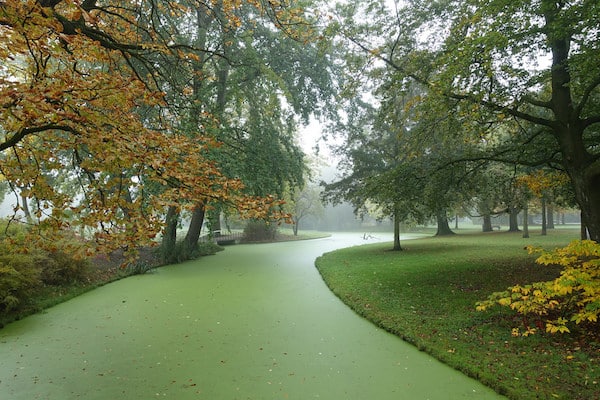 Running along the ‘right bank’ of the river Maas and into Het Park is a scenic and easily accessible route in central Rotterdam. There are paths and walkways along a series of canals and inlets, where you can do some fun ‘in and out’ running from the Erasmus Bridge, heading west into the Delfshaven neighborhood. We’ve mapped nearly 7 km (4.3 mi

les), starting from the Erasmus Bridge, ending at the west end of the ‘Bartel Wilkonade’ path. You can continue further, winding around more little canals, but it’s a bit more industrial and the path less seamless.

Het Park. Just about 1.5 km west of the Erasmus Bridge, enjoy a jaunt into Het Park. It’s a classic European park, designed in the 1850s in the English landscape style. There are numerous paths, and some of Rotterdam’s oldest trees. A run around the perimeter of the park is ~2 km, with an additional 1-2 km of interior paths.