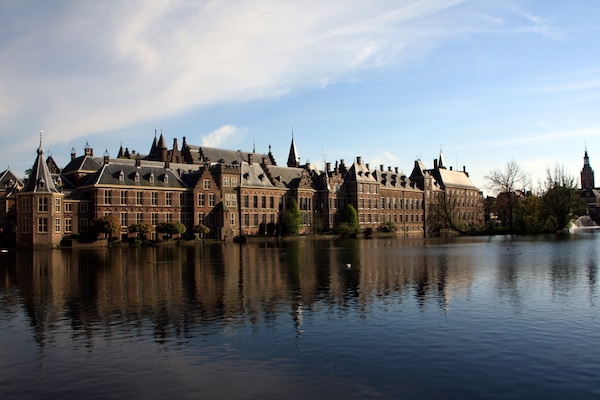 This is a ‘runseeing’ tour of The Hague’s central sections, featuring the seat of Netherlands government, embassies, museums, and sites that define this city as a center of international justice. Our tour clocks in at 10.8 km (6.7 miles), but the distance can be varied. There’s also not an easy pattern of longer roads in the Hague that are also nice for running, so this route has a few turns.

We start at the the ‘museum center’ near the Marriott & Den Haag, location of the Gemeentemuseum & GEM museums (modern art),  Museon (science & culture), & Fotomuseum (photography). Take a quick jaunt along Catsheuvel to see the World Forum conference center, and then run along the southern border of the Zorgvliet estate/park, along Johan de Wittlaan, which is the Hague’s embassy row. You’ll arrive at the grounds of the Peace Palace (Vredespaleis), and then RIGHT on Zeestraat, passing the Telecom Museum and a museum devoted to the work of the famous Dutch artist Hendrik Mesdag. Continue straight on Noordeinde, a lovely street lined with shops & cafes, to reach the Noordeinde Palace, Regal site of Dutch king’s offices dating back to the 16th century. Now you’ll be at the waterside Dutch parliament buildings of the Binnenhof, passing through historic medieval gates on streets lined with flags. Head NORTH on Herengracht toward the central train station, and if you like, do a quick jaunt around the Koekamp and Malieveld parks. At the southern end of Malieveld is Museum Meermanno (book production & design). Turn RIGHT at the Escher in Het Paleis onto the Denneweg, running through a pleasant pedestrian zone for ~1 km, then LEFT on Javastraat (or any of the side streets in the Archipelbuurt neighborhood), and then RIGHT on Scheveningseweg, along the roadside path that bisects the Zorgvliet with the Scheveningse woods. To conclude, run through the paths of ,Zorgvliet, or LEFT on Adriaan Goekooplaan.

Add-Ons: For a longer run, an easy add-on is to enjoy the paths of the Hague Woods or the Scheveningen woods.