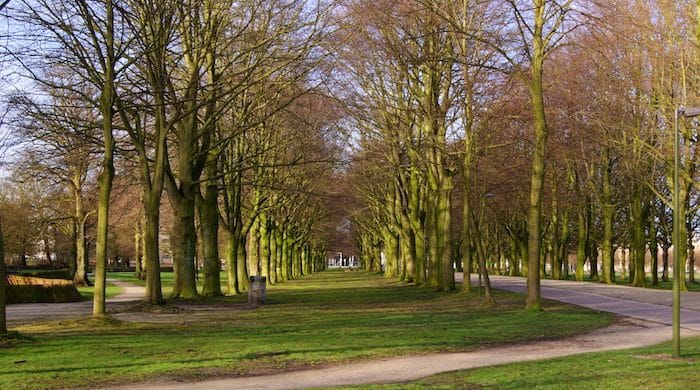 These are two wonderful, easily acccessible ‘wood parks’ featuring long, wide paths that are great for running. Scheveningen Woods (Scheveningse Bosjes) located between Scheveningen and The Hague, was created between 1100 and 1400. Paths wind through woods, several of them wide and alée-like. It’s ~2 km from end-to end. There’s a pond with a perimeter path, numerous interesting monuments and sculptures, the Madurodam (interactive park depicting a typical Dutch city), gorgeous red clay tennis courts, and a cemetery. At the the southern end of the park is the Gemeentemuseum of Contemporary Art, Museon (science and culture), and the Hague World Forum. Across the Scheveningseweg at the southern end of the park, add ~1 km of running along paths of the Zorgvliet estate, especially beautiful in spring with its sea-like carpet of bluebells.  For a longer run, it’s about 2 km between Westduinpark and Scheveningen Woods. The most direct connector route is Kranenburgweg. Van Boetzelaerlaan is a nicer road. Also, Tram 28 takes 10 minutes between the two parks.

Hague Forest (Haagse Bos) is a gateway to the Hague and a mere 800m from the central train station. It’s the oldest forest in the Netherlands. Wonderful, wide paths grace the park, gentle and great for running. It’s rectangular shaped, ~2.5 km north-south and 0.6 km east-west. The park features a pond winding through its middle, and the 17th century Bosch palace (Huis Ten Bosch) at the northern end. At the southern end, enjoy running in the large grass field of Malieveld Park, location of events (and protests), and in the forest paths of adjoining Koekamp Park.