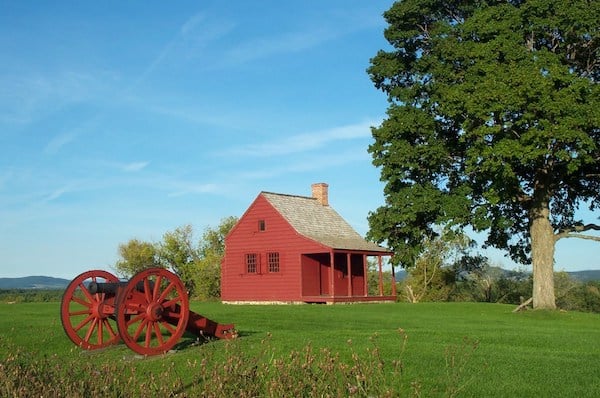 For a scenic, historic, and educational run, we recommend heading to Saratoga National Historical Park, located 11 miles southeast of Saratoga Springs. The park commemorates the 1877 battle during the American War for Independence, American troops battled and beat a British invasion force, marking the first time in world history that a British Army ever surrendered.

There is some terrific running in the park, combining the park loop road and the battlefield trails. The park loop road (Saratoga National Battlefield Rd.) is 11 miles one-way, with a wide shoulder designated for bicycles and pedestrians. It’s very scenic, with open views to the battlefield, several farms, and the Hudson River. Our mapped route of the road also includes short loops around the Bemus Heights Trail and the Liaison Trail at the Freeman House Site.

Another good option is to combine sections of the road with some of the rolling hill trails at the northern end of the park. Looking at the park map, note the trails off sites 1,5,6,8.9,10. A printed map is available at the visitor center.

National Historic Landmark that's renowned for its cultural, aesthetic, and recreational features. For running, there are 15... more...