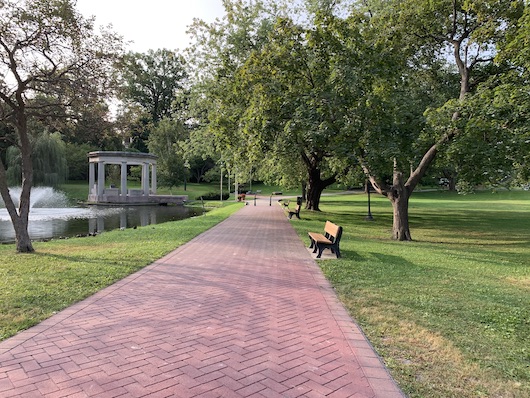 There are numerous options to explore the historic streets of downtown Saratoga Springs and some of the area’s parks and trails nearby. This one highlights historic Broadway Ave. and the campus of Skidmore College. Note the residential streets east and west of Broadway are also pleasant for running, with many nice homes. Skidmore also has some good trail running options. 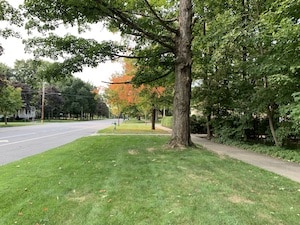 Start by running through lovely Congress Park, which features graceful paths, ponds, and sculptures. Then, head north on N. Broadway Ave. for 1 mile  — after a brief section of shops and restaurants in Victorian-era buildings, the street becomes quiet and is lined with historic mansions featuring spectacular architecture.  (note: steady uphill).  You’ll see a sign for the entrance to Skidmore College, off Broadway. Do a little loop around the campus, making sure to take in the trails around South Park. Make your way west to Clinton St., where a path runs parallel, passing the athletic fields. Then, LEFT on Clement, and RIGHT on State St./Woodlawn Ave. for the 1 mile return along these pleasant streets paralleling Broadway, with nice homes and good sidewalks.

Add-Ons: Skidmore is also known for its 150 acres of fairly rugged trail running in the North Woods, which has red, blue, or orange markers. Access just north of campus (Falstaff’s Parking lot).

Can also do some additional paths on the Skidmore campus, or some of the pleasant residential streets east and west of Broadway. Can also head south on Broadway toward Saratoga Spa State Park (route) or east of Broadway to the Spring Run Trail (route).

National Historic Landmark that's renowned for its cultural, aesthetic, and recreational features. For running, there are 15... more...