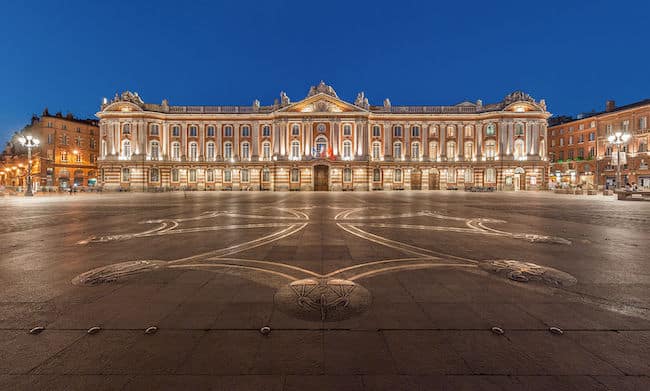 This 10.5 km ‘runseeing’ tour of Toulouse hits the highlights, including the historic centre, numerous parks and gardens, the hip St.-Cyprien neighborhood, and some nice waterfront sections. (rue=street, pont=bridge)

Start at the magnificent Place Saint-Pierre square on the northern side of the Garonne River. Run for 3 km along the Canal Brienne/Midi paths and then through the paths of the Japanese Gardens/Jardin Compans Caffarelli. Our next section is through the Old Town, using Rue de Chaine and Rue des Lois to pass the Musée Saint-Raymond, several important churches, and the neoclassical palace, Place du Capitole. Then, follow Rue des Arts through the city’s old section. At the Musée des Augustins, LEFT on Rue de Metz, to the Saint Stephen’s Cathedral (St. Etienne Square). The next 2.5 km is along a greenway/linear park. Turn RIGHT on Allées Forain-François Verdie, heading south to the Grand Rond park and its fountains and gardens, loop around the Jardin des Plantes, and then along the Allée Jules Guesde path to the Garonne River. Cross Pont St.-Michel, and through the lovely Prairie Des Filtres riverside meadows, crossing back over Pont Neuf to return to the start.

Add-Ons: Explore the narrow, historic streets of Old Town (go early to avoid crowds!), or more along the river and canal paths.

Run for 250 km to the Mediterranean! The Canal de Midi multi-use path runs right along the... more...