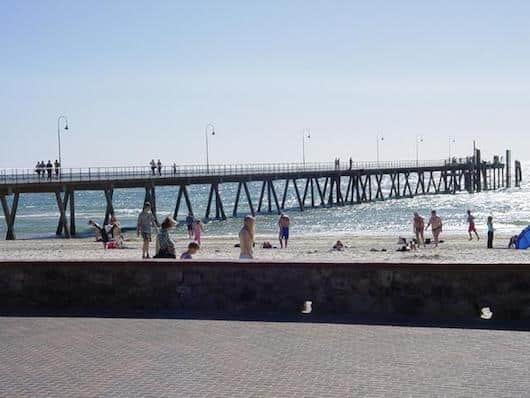 A great feature of every Australian state capital is the ability to run along the coast, and Adelaide is definitely no exception! The Coast Park Trail, which runs for 70 km from from North Haven to Sellicks Beach, is located only 11 km west of  Adelaide and accessible by a 40-minute bus or tram ride. The paved, multi-use trail is very popular with visitors and is suitable for walkers, runners and cyclists. The beach is also terrific for running in most sections — plenty wide and with firm sand — and in some spots the main trail is on the beach.

There are practically endless picturesque options and distances to choose. We’ve included a map of the full 70 km trail. A popular starting point is the Glenelg Pier, which is closest to Adelaide and accessible by transport. From Glenelg, it’s 24 km to the northern end of the trail and 56 km to the south end. And there are plenty of cafes available for post run recovery.

A popular route from Glenelg is to head south to Brighton Beach for an 8-9 km out and back, turning around at the Brighton Pier. The Brighton Beach Sculptures by the Sea exhibition is popular in summer. Continuing further south for another 2 km is Seacliff Beach (requiring a short on-beach section).

Heading north from Glenelg you will reach West Beach after 4.7 km or Henley Beach after a further 3.2 km, making for round trips of 9.4 km and 15.8 km respectively.

Add-Ons/Variety: The West Side Trail and Mike Turtur Bikeway are two multi-use paths that run the ~10km between Glenelg and central Adelaide. Patawalonga Lake is a good loop option just north of Glenelg, and the West Lakes loop is north of Henley Beach.

A paved 5.8 km path around this picturesque lake north of the city, adjacent to gorgeous lakefront... more...