No Thanks
Antalya, Turkey 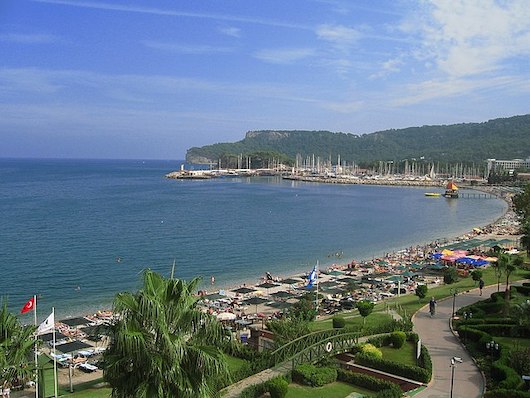 Kemer, technically part of the Antalya region, is a seaside resort known for its pebble beaches and large marina. It’s backed by the pine forests of Olympos Beydağları National Park, where cable cars run to the top of Tahtalı Mountain. There are some good options for running in Kemer.

Watefront/Marina Tour. The best place to run in Kemer is to stitch together a tour of the marina area. There isn’t a seamless waterfront promenade. Rather, it’s a series of small paths, starting around the Hydros Hotel, then along the beach, through Kuğulu Park, then around the marina & a series of small parks and Moonlight Beach. Our mapped route also includes a jaunt down Münir Özkul Liman Cd., Kemer’s main commercial streets.

Olympus Pine Forest. There’s some nice running in the Olympus Pine Forest near Moonlight Beach. Use Atatürk Cd. (road), which itself is runnable, and then explore some of the forest paths — some wider & easier, others narrow. Not a lot of waymarking in here!

Tahtalı Mountain. This is a popular mountain for hiking, and skiiing in winter. Best accessed cable car (Teleferik), located 20 km from the center of Kemer. It’s possible to run/hike up the mountain. From the summit, there are numerous trails, including access to The Lycian Way, a long-distance hiking trail. Note: can be snow-covered in winter. MAP & INFO