No Thanks
Bern, Switzerland 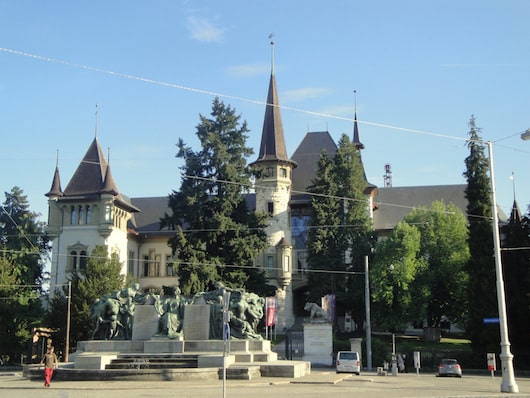 There are some nice running options on the eastern side of the Aare. We have two, non-overlapping routes here: a tour of the Kirchenfeld (‘Museum District’), including paths along the river and the Tierpark, and a longer route that includes a jaunt to the Klee Museum and some pretty streets around the pastoral Murifeld and Elfenau Park.

Kirchenfeld Loop 1. This 6 km loop starts at the Museum complex, just over the Kirchenfeldbrücke from the Inner City. Do a little loop around the numerous museums, then run for 1.5 km south along the Aare River path. Do a loop of the Tierpark, then use the Thunstrasse for an express return to the start!

Kirchenfeld Loop 2. This is an 8 km option that doesn’t overlap much with loop 1. Start with a run through the Tierpark, and then use Steinerstrasse heading northeast for 1 km to the Paul Klee museum, passing a small pond. Nice grounds for running at the Klee museum (see our route there). Head back south through the Murifeld area, along Melchenbühlweg (pretty road passing fields, the Paul Klee Eiche, and the Wittigkofen caatle) and then the Surbekstrasse. At a major intersection of numerous roads and the Egghölzli transit station, turn RIGHT onto Egghölzlistrasse for ~1 km to Elfenau Park. Enjoy the paths around this pretty, small park, and then use the river path for 1+ km to return to the start. OPTION: In Murifeld, off Jupiterstrasse, there’s a 2 km ‘parcourse’.

A classic European river run, although this one is especially charming. The 7 km loop, on the... more...