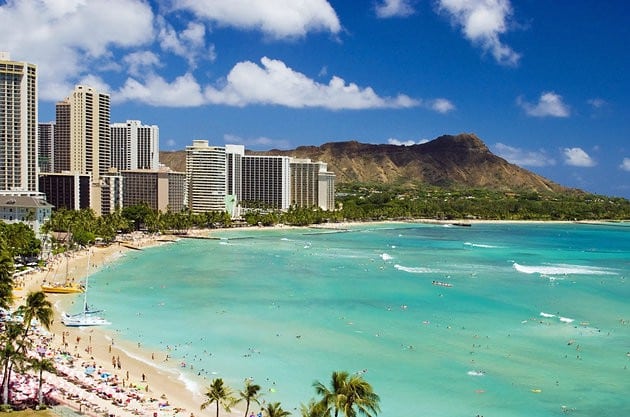 Located on the island of Oahu, Honolulu is the vibrant epicenter of Hawaii. You’ll find everything from historic landmarks and treasured monuments to world-class shopping and a flourishing arts and culture scene. The city is also a major hub for international business, military defense, as well as famously being host to a diverse variety of east-west Pacific culture, cuisine, and traditions. This is a guide to the best places to run in Honolulu, Hawaii.

Note: If you’d like to have a guided running experience in Honolulu, we highly recommend our affiliate partner Go! Running Tours.

Honolulu is home to some fabulous running, with the great weather among the star attractions. Highlights near the city include the famous Waikiki Beach and the Diamond Head volcano. We’ve also included some great running spots elsewhere on Oahu. Makapu‘u Point Lighthouse Trail, sections of the road from Hanauma Bay to Waimanalo, and the Kaena Point Trail are worth the effort.

Some of our favorite runs in Honolulu, HI

One of the iconic runs in Hawaii. This route tours the 2 mile long beach, Honolulu’s beachfront... more...

A great loop around Honolulu’s most iconic landmark. Hilly, with sweeping views of Honolulu’s east side: High-end... more...

By the Beach | Iconic | Seaside Promenades
One of the iconic runs in Hawaii. This route tours the 2 mile long beach, Honolulu’s beachfront neighborhood, with views to the water, crashing surf, and the Diamond Head Volcano.
Explore 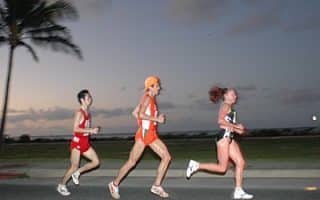 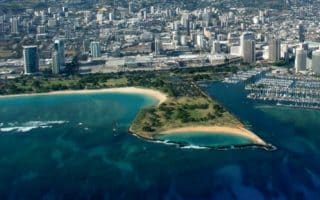 Ala Moana Park and Magic Island

By the Beach | Parks
Beach and grassy area popular with runners. A network of sidewalks allows you to run along the beach, throughout the main park, and throughout Magic Island.
Explore 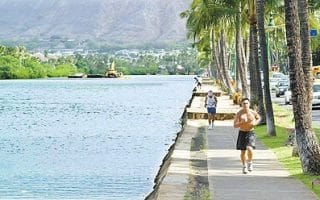 Along the Water
A pleasant waterside run just north of Waikiki Beach. The Ala Wai Canal and park parallels the river. Popular among local runners for its light traffic and well maintained path. Nice add-on to Waikiki Beach run.
Explore 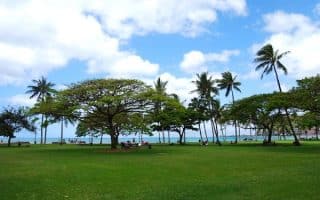 Along the Water | Parks
2 mile loop around park. Highlights are palm-lined section along Kalakaua Ave. and the banyan-shaded Paki Ave. A nice variation or add-on to Waikiki, Diamond Head, Ala Wai Canal runs.
Explore 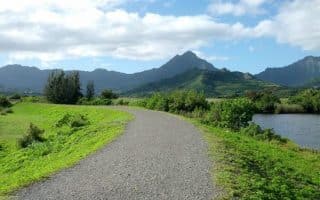 Also in Kailua, this trail travels through Kawainui Marsh, which encompasses over 800 acres of beautiful wetlands. Great views of the majestic Ko’olau Mountains. Various trail and loop options.
Explore 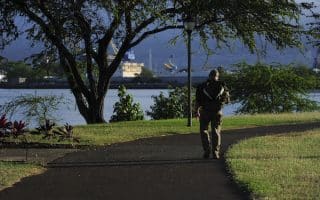 Historic / Tourist | Multi-Use Trails | Rails-to-Trails
Pleasant, paved bike path in the Pearl Harbor area, runs for 5 miles from Aloha Stadium to Waipahu. The scenery is a mix— some of the sites near Pearl Harbor, residential neighborhoods, locks, farms, parks, and wildlife refuges.
Explore 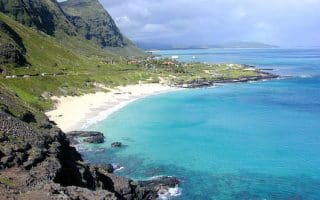 Along the Water | Great Views | Hilly
One of the most scenic drives on the Hawaiian Islands is also a wonderful spot for running. It's 7.5 miles from Hanauma Bay to Waimanalo along the Kalanianaole Highway, with a volcanic crater on one side and a the Pacific Ocean on the other.
Explore 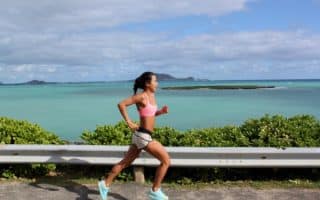 By the Beach | Gorgeous Residential
An easy, flat course through the upscale neighborhood of Kailua takes you along beach access roads to enjoy beautiful views in a quite part of town. About 35 min. drive from Waikiki.
Explore 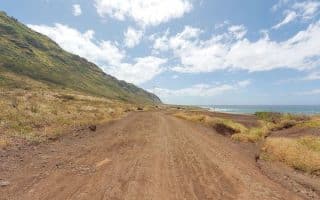 Along the Water | Great Views | Trail Running
A wonderful and accessible trail run to Ka‘ena Point in the northwestern part of Oahu. The trail runs along a former rail bed and dirt road, so it is fairly wide and not technical. Views of boulder beaches, tidal pools, cliffs, coastal plain, and sand dunes.
Explore

By the Beach | Iconic | Seaside Promenades
One of the iconic runs in Hawaii. This route tours the 2 mile long beach, Honolulu’s beachfront neighborhood, with views to the water, crashing surf, and the Diamond Head Volcano.
Explore

Honolulu has a hot, semi-arid climate with a mostly dry summer season, and a more humid winter season. Average rainfall of 17 inches occurs mainly from October through April in tropical downpours. Temperatures vary little throughout the months, with average high temperatures of 80–90 °F and average lows of 65–75 °F. Honolulu has an average of 278 sunny days and 90 rainy days per year. If you want to be at the heart of all the action, then Waikiki is the place for you. There’s an abundance of hotels within walking distance of the beach. All of the iconic routes (Ala Moana Park and Magic Island, Waikiki Beach, Kalanianaole Highway, Diamond Head, and Ala Wai Canal) are easily accessible if you chose to stay in this area. Running Room Kapahulu Avenue. A Store for Runners… By Runners.

Central Oahu Jogging Clinic Organized by the Department of Parks & Recreation this training group meets on 6am Sunday mornings.

The Ultimate Foot Store Ala Moana Blvd. Top quality foot products, with expert advice and service. They specialize in helping runners with injuries and ailments.

Be Fit Kailua Kailua. About a 20 minute drive from the city of Honolulu, but the outstanding customer service you’ll receive from owners Jeff and Lisa make it worth the time and gas.

The Hapalua April. Half Marathon.

Hawaii Pacific Health Women’s 10K March. Women only event around Diamond Head and through Kahala and returning to Kapiolani Park.

Pineapple Run 10K May. Run through the hills of beautiful Wahiawa and the surrounding pineapple fields. Don`t forget to pick up your free pineapple at the finish!