The best places to run in Oman, inclusing Muscat & Other Visitor Locations 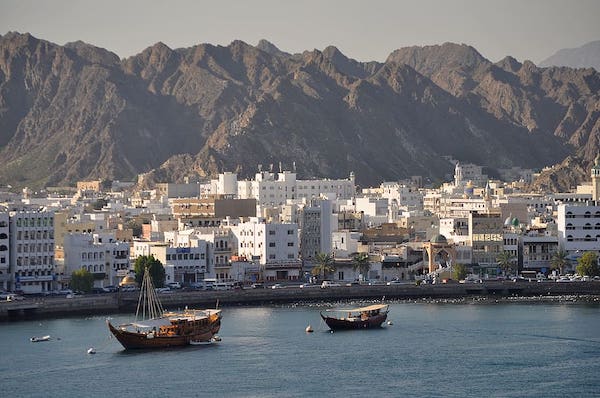 Oman, located on the southeastern coast of the Arabian Peninsula bordering the Arabian Sea and the Gulf of Oman, is a former maritime empire that is the oldest continuously independent state in the Arab world. It’s a scenic and prosperous country, with an attractive coastline, beautiful beaches, rugged interior  mountains, and numerous wadis forming desert oases. Our guide to running in Oman is mainly focused on the Muscat area, which contains half the country’s 5 million people.

The best places to run in Oman are on waterfront paths and beaches. In Muscsat, there are four distinct sections, which comprise some 25 km of non-contiguous promenades along the Gulf of Oman. The beaches are also runnable. Mutrah, the former center of commerce in Oman, is another favorite running spot, with historic sites, parks, and Corniche waterfront path. The upscale Qurum area has a lovely park, beachfront path, and decent streets for running in the resisdential and Ministries area. In the Seeb area, Al Mouj has beautiful boulevards and landscaped walkways, a scenic marina, and a waterside linear park. Adventurous runners and trail runners will find glory in Oman’s interior mountains, desert, and wadi canyons and paths.

Some of our favorite runs in Oman

The best running in Muscat is along one of a series of waterfront promenades. We've mapped four... more... 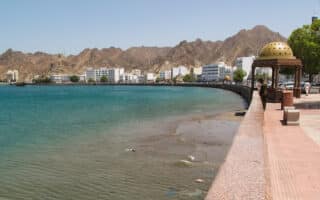 The best running in Muscat is along one of a series of waterfront promenades. We've mapped four non-contiguous sections between from Mutra and Seeb Beach. Great views of the Gulf of Oman & interior mountains. Beaches are also runnable!
Explore 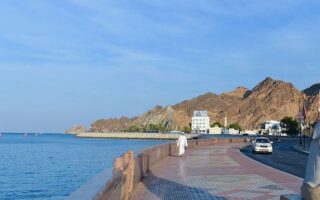 Mutrah is one of our favorite places to run in the Muscat area, with historic sites, a large park, wide boulevards, and the 4 km Mutrah Corniche waterfront promenade. Full route is 11+ km. Add-on with Riyam Park.
Explore 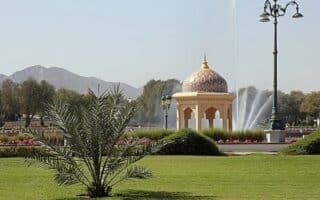 Great running in this upscale suburb of Muscat. Qurum Natural Park is a green oasis with nice paths making for a 3.5 km loop. Combine with the Qurum Beach path for an 11 km run. Beach and residential streets in area also runnable.
Explore 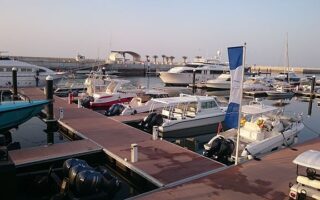 Al Mouj is an upscale residential community in the Seeb area, near the airport. It's a nice neighborhood for running, with beautiful boulevards and landscaped walkways, a scenic marina, and a waterside linear park.
Explore 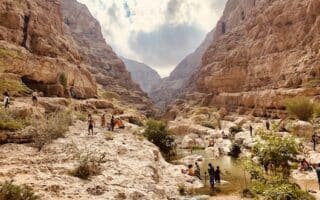 The Wadis of Oman

Experienced trail runners will be in their glory in Oman's rugged desert mountain landscape. For slightly gentler trail running, the roads and paths that pass through Oman's wadis make for a unique running experience. Note: rugged, exposed, and hot.
Explore

The best running in Muscat is along one of a series of waterfront promenades. We've mapped four non-contiguous sections between from Mutra and Seeb Beach. Great views of the Gulf of Oman & interior mountains. Beaches are also runnable!
Explore

Runners need to be aware of Oman’s weather, Muscat’s weather, which ranges from warm to very hot. Daytime temperatures range from 32-38C (90-104F) from April-October, with nights staying sultry in summer. The winter months are a bit more temperate, with comfortable daytime highs in the 25C (77F) range and nights that can dip to 16C (60F). Muscat only gets 100m (3.9 inches) of rain annually — nearly all of it in winter. Note that there are some other climate zones in Oman with even hotter weather, with tropical climate in the Salalah area and more rainfall in the interior mountains.

In Muscat, there are numerous upscale hotels that are near the nicest waterfront paths and in our favorite running neighborhoods such as Mutrah, Qurum, and Al Mouj.

There are numerous stores for buying running gear in Muscat, with Nike and Adidas outlets.

Muscat Ultra Runners Running Shop is the only independent, running-centric store in Oman.