Focused on the Oregon North Coast, from Long Beach (WA) to Devil's Punchbowl

The Oregon Coast stretches for more than 300 miles from Astoria to Brookings. Rugged beaches with pounding surf are backed up by cliffs and rainforested mountains. It’s not a heavily developed area, as most of the coastline is preserved beaches, state parks, or nature preserves. Our guide to running on the Oregon Coast is focused on the North Coast, from Long Beach to Devil’s Punchbowl. Note on beach running: numerous gorgeous beaches, but the sand tends to be a bit softer – best firmness near the water.

From north to south, we start on the Long Beach Peninsula (technically in Washington), which features six state parks and the 7-mile Discovery multi-use trail. In the popular town of Seaside, there’s a scenic boardwalk and a 2-mile beach. Cannon Beach is just south of there, and features good beach running and some great trail running in Ecola State Park. In the Nehalem Bay area, we love running the 5-mile beach and the bike trail in Nehalem Bay State Park. Some of the best waterside running NOT on the beach or Highway 101 is in the Bayocean Peninsula area around Tillamook Bay. In Cape Lookout State Park, there’s a fantastic beach run to the end of Netarts Bay, and a scenic trail run to Cape Lookout. Further south, some favorite beaches for running are Cape Kiwanda, Beverly Beach (Newport), and Ona Beach in Seal Rock. There are numerous additional beaches that are great for running, and just inland in the mountain/rain forest areas, hundreds of miles of small, hilly unnamed roads making for countless trail running opportunities and hill challenges.

Note that State Highway 101 hugs most of the coastline. It is a busy road, but in many spots there’s a decent shoulder. We’ve pointed out some of the more scenic, ‘runnable’ sections. Also, outside the summer months, the weather along the Oregon Coast can be cool, windy, and rainy. Even in summer, be prepared with layers.

Some of our favorite runs in Oregon Coast, OR 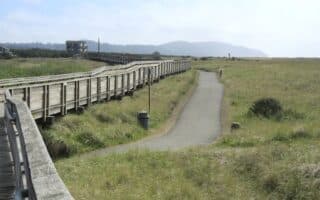 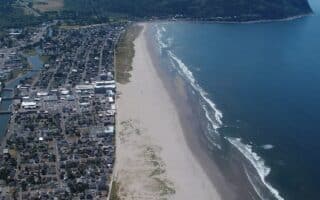 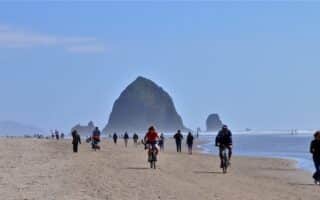 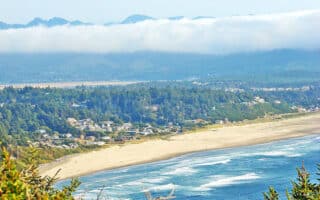 By the Beach | Great Views | Multi-Use Trails | Great Beach Runs
The highlight of running in the Nahalem Bay Area is the several miles of gorgeous beach, featuring firm, packed sand. In Nehalem Bay State Park, there's a 2-mile bike trail, and some quiet roads for running in the coastal town of Manzanita.
Explore 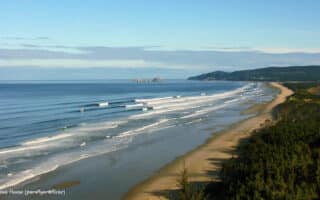 By the Beach | Great Views | Great Beach Runs | National Parks
Fantastic running options in this area. Favorites include some waterside roads on the Bayocean Peninsula and along Tillamook Bay, the 5-mile coastal trail on the beach to the end of Netarts Bay, and some trail running in Cape Lookout State Park.
Explore 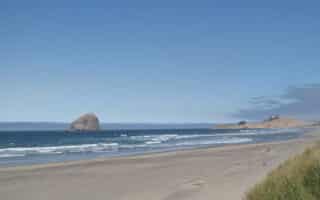 By the Beach | Great Views | 'Unique' Runs | Great Beach Runs
Two great beach running options on Kiwanda Beach. Up to 3.2 miles at Cape Kiwanda State Natural Area, with views to Haystack Rock, including a unique sand dune hill that can be run up & down. Just south, nice beach running between Porter Point and Neskowin.
Explore 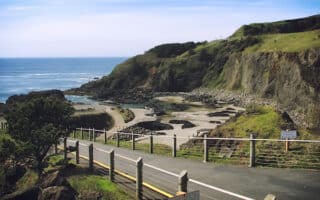 By the Beach | Great Views | Hilly | 'Unique' Runs | Great Beach Runs
In Newport, fantastic beach running along Beverly Beach at the popular Devil's Punchbowl area. Just south at Yaquina Head, get some hill work in on paved surface with a jaunt to the lighthouse or some of the hill trails. Fantastic views!
Explore

Weather on the Oregon Coast is a tale of two seasons. Summers are spectacular, with fairly dry conditions and mile temperatures, although it can often be windy at the beach. From October through May, it can be overcast and stormy, with many months featuring 10+ inches of rain. There’s not that much temperature variation. Summers are mild, with highs in the mid-60s (18C) and cool nights. In winter, typical daytime temperatures approach 50F (10C), and average lows are just shy of 40F. Freezing temperatures and snowfall are rare on the coast, but can occur in the mountains just inland. 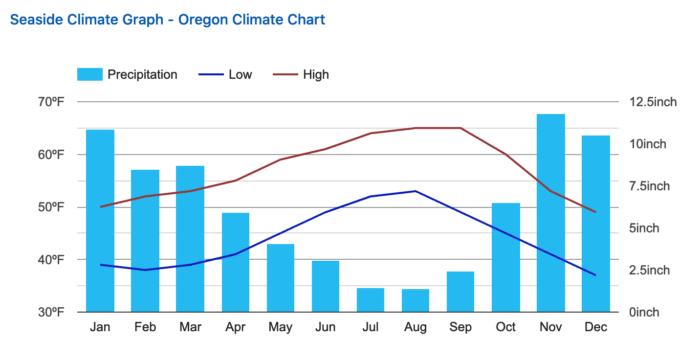 There aren’t any independent running stores in the small coastal towns, but there are some outdoor recreation stores that will carry running gear. There’s also a Nike factory outlet store in Seaside.