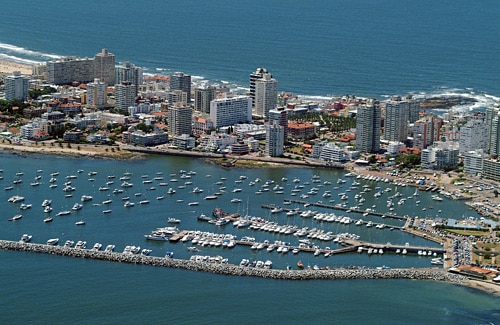 Located 130 km east of Montevideo on the Atlantic coast in southern Uruguay, Punta del Este is known as one of the more upscale resorts in South America. Tourists flock here, especially in summer. The coastal location, beaches, and waterfront make for some wonderful running in Punta del Este. The best place to run in Punta del Este is along the 7 km loop of the peninsula, following the Rambla General Jose Artigas, wrapping around beaches and port, with great water views. Playa Brava offers several km of good running on fairly firm sand. The Barra neighborhood also offers some nice running. A great destination run is to take the quick ferry to the pedestrian-only Gorriti Island. Further west of Punta del Este, Lussich Arboretum has some lovely running trails. And it’s worth the 1/2 hour drive west to Piriápolis to enjoy some fantastic coastal running and see the belle époque–style buildings.

The signature run in Punta del Este is the nearly 7 km coastal loop that heads down... more...