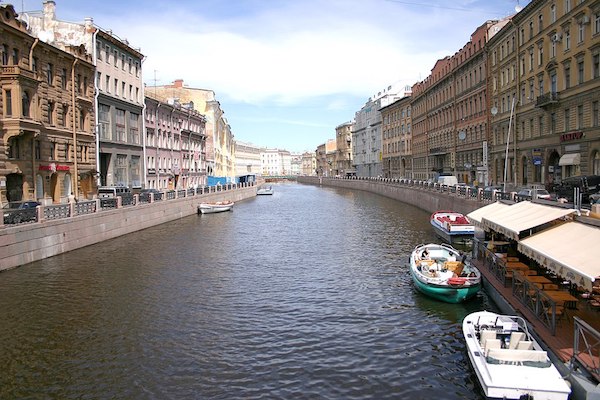 While a few of our other St. Petersburg running routes showcase the Neva River, this run is along the two canal-like rivers coming off the Neva: the Moyka and Fontanka River Embankments. There are pleasant sidewalks/walking paths along both of these rivers, and the roads along them are generally quieter. This is a scenic run, with water views the whole way, passing by some of St. Perersburg’s interesting older buildings. Our route is up to 14 km, from one end of the Fontanka River to the other, then connecting with the Moyka River paths. Starting at the northern end of the Summer Garden at the Neva River, run southwest along the Fontanka river embankment. It’s 6.5 km to the end (we prefer the south side), passing St. Michael’s Palace, the elegant Anichkov Bridge, Military Medical Museum, and the spectacular Muzey-Usad’ba G. R. Derzhavina building.

For the return, either retrace your steps (perhaps along the north side), or connect to the Moyka River, using Lotsmanskaya Ulitsa for 0.5 km. Run along the south side of the Moyka for ~ 6 km, passing Quarter Museum, Yusupov Palace, Mariinsky Palace, the Monument to Nicholas I, the baroque Stroganov Palace, Pushkin Museum, and the Hermitage, before completing the run at the Summer Garden.

One can do a shorter run by turning around at any point, or creative loops using the many bridges. This route also runs into a few of our other central St. Petersburg routes, so mixing and matching also possible.