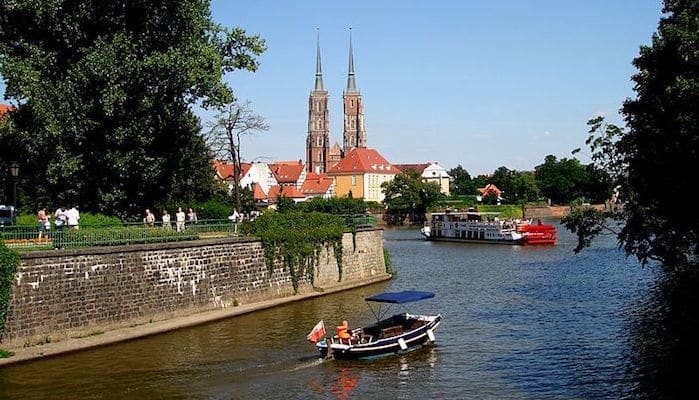 Wrocław is built up around the River Oder, which presents some of the best running opportunities in the city. The paths along the riverbank are somewhat intermittent, so the north and south bank ‘routes’ are somewhat separate. The River Oder paths combine easily with the Stara Odra and Kanalowa paths.

Southern Bank: Run the bridges and “bulwars” of the island parks just north of city center, starting from Wyspa Słodowa Park. You’ll run across three ‘islands’, heading south. Then, cross the Plaskowy Bridge to the south bank, continuing southwest on bulwar Xawerego Dunikowskiego for an out and back of about 4 miles. At the Grunwaldzki Bridge, the path narrows, but it’s possible to continue south along sidewalk. Runners can either go along the Olawa River for some time or cross Oławski Bridge and run along the Na Grobli. This paved bike lane eventually turns into a pleasant cobblestone path in Bierdzany.

Northern Bank: On the north bank of the river, runners can start from the Pokoju Bridge, and follow the river for 6.5 km east to the canals, along Fryderyka Joliot-Curie and wybrzeże Stanisława Wyspiańskiego. Where the path meets the Stara Odra (2 km mark), cross the Zwierzyniecki Bridge. A wide dirt path leads around the perimeter of the Wrocław Zoo before it cuts inland through Park Biskupiński (4.5 km) and ends at the Jaz Bartoszowicki pedestrin Bridge. From here it connects to more great running along the Kanalowa.

Looking for some company on your River Oder run? Try Parkrun, a free Saturday morning 5k that takes place at Park Biskupiński.