The Gardens of Central Florence 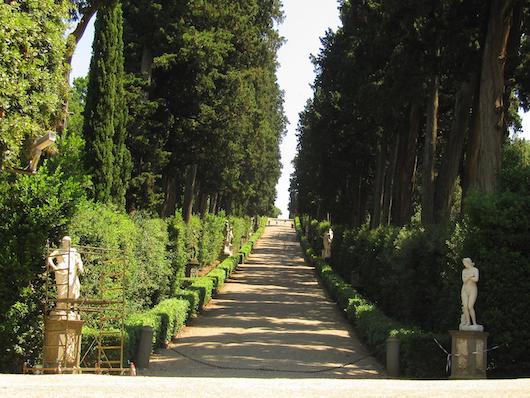 This route showcases some of the historic gardens of central Florence: Giardini Terzo, Bardini, and Boboli.  It can be combined with other central Florence routes, such as Piazzale Michelangelo and the Arno River route. Use our mapped route as a guide, as there are numerous additional paths.  Note: hilly!

Start at the Ponte alle Grazie on the south bank of the Arno River, and do a pleasant, ~1.5 km loop of the riverside Giardini Terzo. Them run by the Torrigiani Palace up the hill into the Giardino Bardini, and enjoy a 1-2 km loop around the hilly, scenic paths, with great views of the city. Exit through Porta San Giorgio, and use V. Forte San Giogio into the Boboli Gardens, a lavish 15-16th century public garden, with Renaissance statues, ornate fountains, and beautifully landscaped paths. It’s ~1 km from end-to-end, though there are several km of additional paths. It’s fun to exit through the Porta Roma, explore the smaller Giardino Corsi, and then use additional Boboli Gardens paths, existing near the Pitti Palace, back down to the river and then east for 0.5 km back to the start. Note: It’s tempting to also pop into the Giardino Torrigiani, adjacent to Giardini Boboli, but it’s a private garden that requires a tour.

Add-Ons: Additional paths in the parks. Can also add with our Piazzale Michelangelo and the Arno River routes.