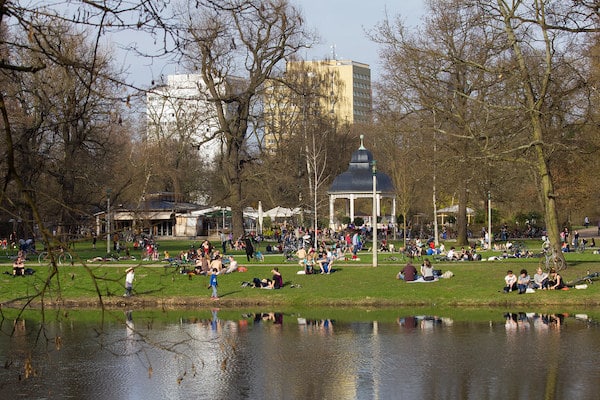 Leipzig has a wonderful collection of parks and forest preserves close to the city center. This 7 km run highlights Clara-Zetkin Park, Palmengarten and several adjacent parks just west of the city.

Start at Johanna Park, adjacent to the Stadt Leipzig (New Town Hall),and run for 1.5 km along the paths of Clara-Zetkin Park to the Rennbahn Scheibenholz (racecourse). Be sure to include Anton Bruckner Allee, which has the popular, signposted 3 km Telekom Running Track, which is popular for running (bonus: lit at night).

Cross the river to the western side for a 2 km loop around the trails there. The next section heads north along wide, pleasant paths in Trimm dich Pfad park, passing the Sachsenbrücke bridge, and then along a connecting path into the Palmengarten — a spacious riverside park with numerous paths among lovely trees, gardens, and a pond. Cross the Palmengartenwehr/Elsterwehr bridge to return to Clara-Zetkin Park.

Add-Ons:  Numerous additional paths in the parks, as well as riverside paths headed in either direction.