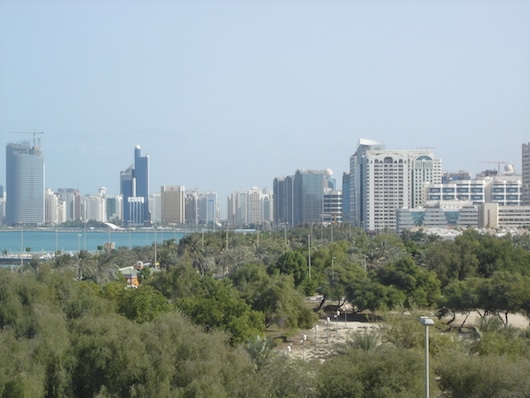 Located on an island in the Persian Gulf, Abu Dhabi is the capital and second largest city of the United Arab Emirates. The city is a popular business and travel destination, known for its impressive skyline, unique architecture, beaches, and world class shopping. The geography itself is impressive, with numerous bridges connecting to a series of man-made islands. There are some wonderful options for running in Abu Dhabi, though the heat is a major factor from April through October. As a mitigating factor, many of the popular running spots are lit at night!

The best places to run in Abu Dhabi are on the numerous seaside paths, notably the Corniche Promenade and Eastern Mangroves Promenade. There are also good paths along the Al Raha Canal and around Al Kasir Island, with great views of the skyline. There are also several beaches that are excellent for running. For unique running experiences, the Yas Marina F1 track is open to runners on Tuesday nights, or head out to the Al Wathba Cycle Track for a run in the desert.

Public transport is somewhat limited in Abu Dhabi, but there are plans to expand the bus system. Taxis are abundant.

Some of our favorite runs in Abu Dhabi, UAE 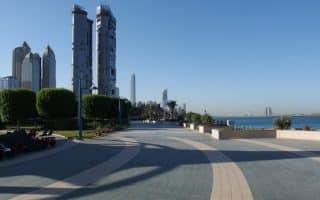 The signature run in Abu Dhabi is the path along the Corniche, featuring great views of the water, beach, and the city skyline. It's up to 9.3 km one-way. Add-on with a loop around the grounds of the Emirates Palace or Al Kasir Island.
Explore 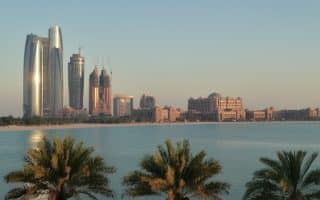 A 10k tour of the island right across from the Emirates Palace grounds, featuring two marinas, the Eye ferris wheel, and impressive views of the water and Abu Dhabi skyline. Can be combined with Palace Grounds and Corniche route.
Explore 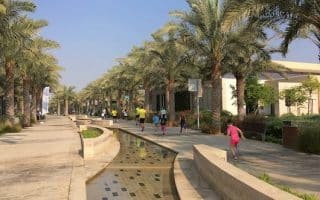 One of the few parks in Abu Dhabi that is large enough for a dedicated run. Located in the upscale Al Mushrif part of the city, the park features a shade house, botanic garden, and a large open lawn. A loop around is 1.8 km.
Explore 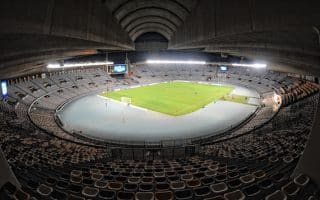 Zayed Sports City is Abu Dhabi's recreation hub, with facilities for numerous sports. Although there's no dedicated running track, there are numerous quiet roads, paths, and fields that can make for a decent run. Well lit at night!
Explore 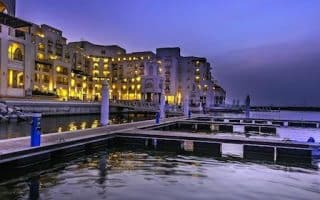 One of the better off-road running options in Abu Dhabi. It's adjacent to Mangrove National Park -- a popular area for kayaking that's also a walking, dining, and shopping destination. Up to 9 km one-way, including the jetty.
Explore 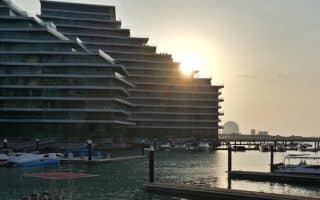 Pleasant path along Al Raha Creek that makes for a nice run of 11-12 km out and back. It's 3 km to Al Bandar Island and nearly 6 km to the Al Raha Beach Hotel. One can also take short jaunts out to the several islands that are right off the path.
Explore 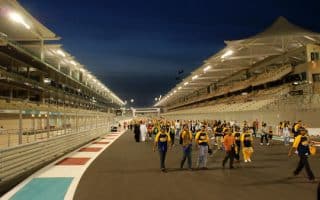 A unique running experience! Once a week, the Yas Marina F1 track is closed to cars and opened for walking, running, and cycling. The track is a 5.5 km loop. A festive fitness scene!
Explore 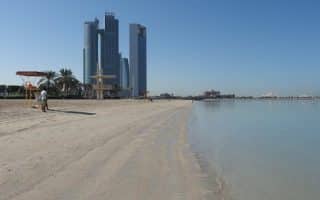 There are several long, wide, beaches in Abu Dhabi. The sand tends to be softer, with some firmer spots near the water. Corniche Beach, Saadiyat Islands Beach, YAS Beach, Al Raha Beach, Al Bateen Beach, and Yas Beach are best for running.
Explore 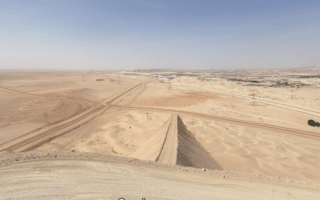 Run amidst the dunes on this paved cycle track, located 45 minutes from Abu Dhabi. Marked loop options of 8, 16, 20, 22, and 30 km. Most scenic at sunrise or sunset. Paths are lit at night! Options for dirt/sand roads in area as well.
Explore

The signature run in Abu Dhabi is the path along the Corniche, featuring great views of the water, beach, and the city skyline. It's up to 9.3 km one-way. Add-on with a loop around the grounds of the Emirates Palace or Al Kasir Island.
Explore

The climate in Abu Dhabi is a major factor for runners. From the months of April through October, temperatures climb above 35C (95F), and average 43C (110F) at height of summer, and quite humid. Nights remain hot. November through March is more pleasant, with daytime highs in the 24-29C range (70s-80sF). It’s a sunny and dry desert climate, with only 57mm (2-3 inches) of rain a year.

Abu Dhabi is a popular visitor destination, with a significant number of hotels and other accommodations. For runners who want something a great spot outside their door, try to stay near the Corniche area.

There are outlets of Nike, Asics, and Brooks in Anu Dhabi. No independent running stores at this time.

Abu Dhabi Striders is part of the growing running community in Abu Dhabi.

There are several meetups for running in Abu Dhabi: Reem Island Runners and House of Runners.

There’s also running on Tuesday nights at the Yas Marina F1 track and numerous group events associated with that.