A Comprehensive Guide to the Best Places to run in Fresno, including the city of Covis 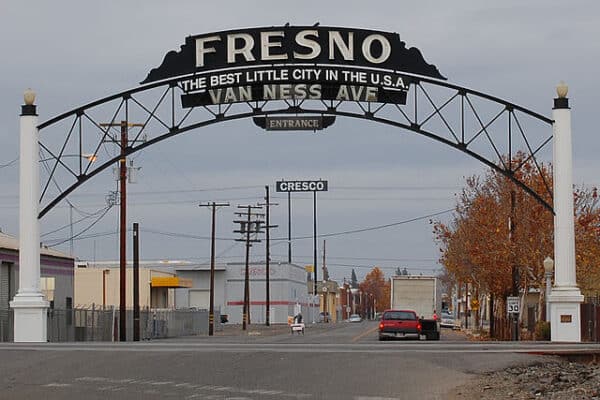 Located in California’s San Joaquin Valley, Fresno is the state’s fifth-largest city and is a major agricultural center. It’s a very spread out city.  For visitors, Fresno is also a gateway city to numerous recreational areas: Yosemite National Park, the Sierra National Forest Kings Canyon National Park, and Sequoia National Park are within 75 miles of Fresno. The opportunities for running in Fresno are mixed — there are no major parks in central Fresno and no natural waterways. The most attractive places to run in Fresno tend to be in the foothills to the north of the city.

Near downtown, there’s nice neighborhood running in the Tower and Fig Garden districts. The signature running spot in Fresno is Woodward Park, which also includes the attractive Lewis S. Eaton multi-use trail. There are also some terrific paths and trails for running in the rolling hills of the Tesoro Viejo residential community. In Clovis, there are numerous multi-use paths, including the longer Fresno-Clovis Rail Trail and the Dry Creek Trail. The Millerton Lake area is a terrific running destination, with a mix of rolling hill roads and some hillier, more options for trail running. For a unique and special running experience, run the Fresno County Blossom Trail between mid-February and mid-March.

Runners should note that Fresno’s terrain is quite open and exposed, so be aware of the sun and temperatures that reach 90F or above most days from May through September.

Some of our favorite runs in Fresno, CA

This 300-acre park is of our favorite places to run in Fresno. The park is a combination... more... 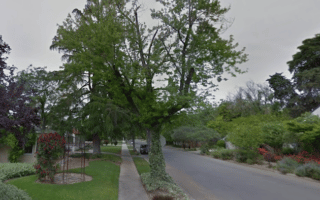 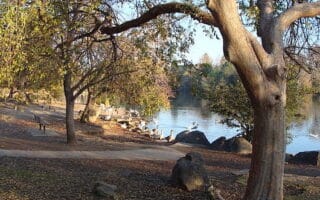 This 300-acre park is of our favorite places to run in Fresno. The park is a combination of open fields and tree-shaded paths. Create your own route on the interior paths, or do a section of the 4.4 mile Lewis S. Eaton Trail or the 1.5 Thomas MacMichael Loop.
Explore 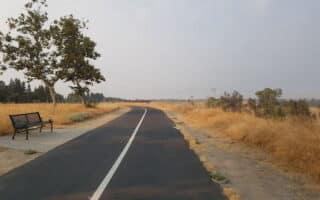 One of the best spots for an off-road run in Fresno. The 4.4 mile multi-use path runs along the south and east sections of Woodward Park along a path above the San Joaquin River, with nice water views. Connects to other trails in Woodward Park & area.
Explore 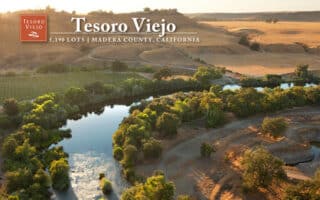 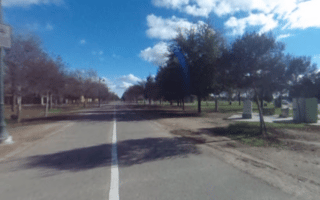 Several paved multi-use paths in the city of Clovis, located 6 miles north of Fresno. The 8-mile Fresno-Clovis Rail Trail connects Fresno with Clovis. Other good options in Clovis are the 2.6-mile Dry Creek Trail and the 2.5 mile Enterprise Trail.
Explore 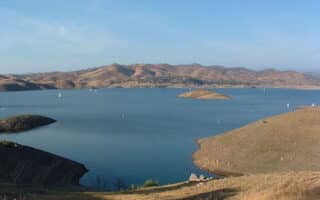 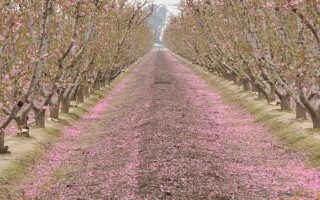 For a gorgeous and unique running experience, hit the Fresno County Blossom Trail between mid-February and mid-March. This is a self-guided road route featuring panoramas of orchards full of fruit trees alive with fragrance and bursting with blossoms.
Explore

This 300-acre park is of our favorite places to run in Fresno. The park is a combination of open fields and tree-shaded paths. Create your own route on the interior paths, or do a section of the 4.4 mile Lewis S. Eaton Trail or the 1.5 Thomas MacMichael Loop.
Explore

Fresno has a semi-arid climate, with hot, dry summers and mild, moist winters. Runners should note that Fresno’s geography is open and exposed, with constant sun and average high temperatures of 90-98F (32-37C) from June through September. Nights do cool off. Winters are mild, with daily highs in the 55-60F range and nights around freezing. Most of Fresno’s 11 inches of annual rainfall occurs from November-March.

There are plenty of hotels downtown, but only a couple of good running spots there. There are also numerous hotels along Highway 41, which provide some decent access to running in the Tower & Fig Garden neighborhoods. Or, try to stay near Woodward Park. If staying near the airport, try to stay on the east side to access the Fresno-Clovis Rail Trail.

This site has good information on local races and running event within 50 miles of Fresno.