No Thanks
Nova Scotia: All Routes 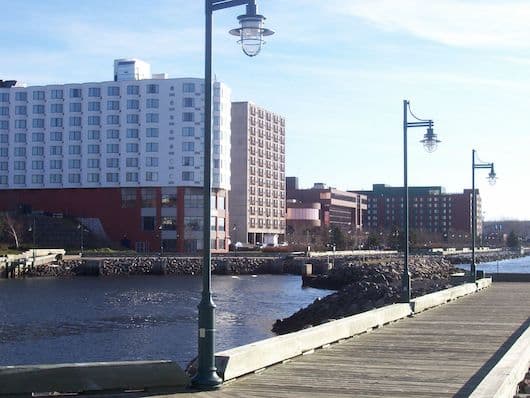 Sydney is the second largest city in Nova Scotia and the main commercial center of Cape Breton Island. The best options for running in Sydney are along the waterfront on the east and west sides of Sydney Harbour.

Central Sydney Waterfront Run and Parks Tour. This is a terrific 10k route that showcases Sydney’s waterfront, cultural highlights, and park system. Start on the Esplanade, near the Cape Breton Highlanders Museum (run by the world’s largest fiddle), and run south along the waterfront Esplanade and Boardwalk for 2 km. Then, run away from the water along Wentworth Municipal Park (Crescent St., Argyle St.) to Greenlink Municipal Park, sort of a linear park with a 3-4 km perimeter path. There are fields, a wellness center, and a small river. Return using George St. & Byng Ave., and retrace your steps along the waterfront (or use other downtown streets if you’d like to explore).

Westmount Waterfront Run. There’s nice running in Westmount, on the west side of Sydney Harbour. Follow the waterfront Westmount Rd. (NS-239) for 4+ km, with water views the whole way (note: sidewalk is on the inland side of the street). Then, enjoy a 2.5 km hilly tour of the pleasant paths around Petersfield Provincial Park, and 1.5 km around scenic Canadian Coast Guard College, which sit on a hill and affords nice views of Sydney Harbour. It’s up to 16 km for the full out and back. Shorter option: Do only part of the waterfront path, or eliminate the park/college paths.