No Thanks
Pattaya, Thailand 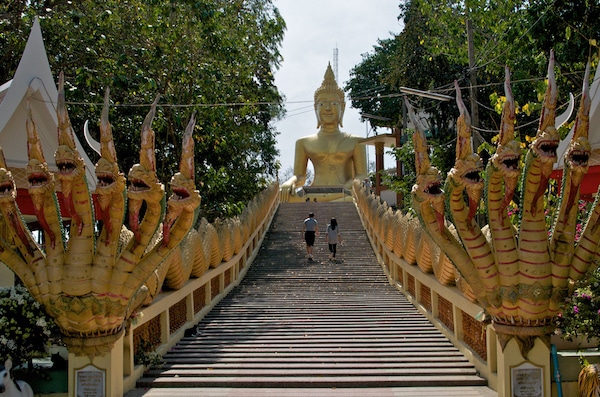 Pattaya Fitness Park (Chaloem Phrakiat Park) sits on a hilly spot about 1.5 km away from the beach and also serves as a central point for some ‘runseeing’ in the area nearby. One the nicer green spots for running in Pattaya, the hill park features combination of paths passing by some nicely landscaped greenery, and some stairs for those who want to get their heart rate up. In all, one can do 1-2 km around here.

From here, run up Phra Tamnak Mountain (1 km out and back), which features a temple and 18m golden Buddha at the summit, and great views of Pattaya Bay. Then head the other direction from the park, along the roads and paths around Buddha Hill. It’s about another 1.5 km out and back to the Big Buddha Temple, passing numerous Taoist Temples and several smaller Buddhas. There are impressive stairs leading to Big Buddha. There are also some paths in the park alongside the road in some sections, and some other roads in the area where you could add on or do some loops. There are excellent views of Pattaya from the hilltop. Note this is a hilly run! Also, please show respect at the two Buddha sites

The signature run in Pattaya. A wide, palm-lined path runs between Beach Road and the beach, and... more...