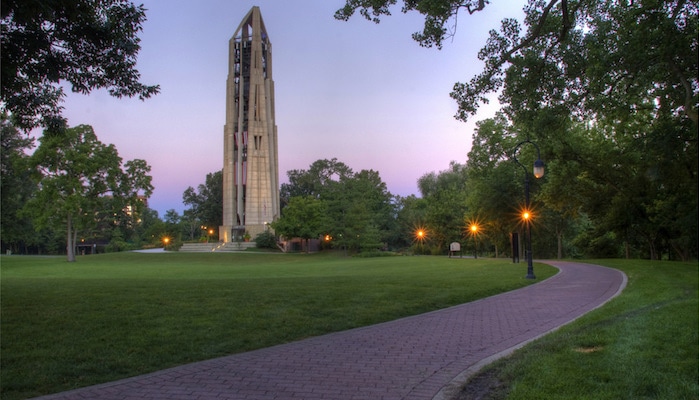 Evanston: Another cluster of big name offices falls around the coastal city of Evanston, home to Northwestern University, and its inland neighbors of Glenville, Skokie, and Wilmette. Wilmette is a nice destination suburb, home to the stunning Baha’i House and the Plaza del Lago shopping center. Big cluster of hotels in Evanston.

Northbrook: An uncanny number of tech companies have settled in the Northfield and Northbrook areas north of Chicago. Popular spot for hotels.

Deerfield: Just north of Northbrook, Deerfield is another magnet for Fortune 500 companies, but otherwise has lots of pretty natural spaces. Lots of hotels in the Lake Cook Road area.

Aurora: The most populated suburb of Chicago, Aurora is known for its vibrant music and arts events, and its scenic location on the Fox River. A few hotels but more options are in Naperville.

Naperville: One of the largest residential suburbs of Chicago, Naperville is known for its rich craft beer and food scene, arts and culture festivals, and a lovely 1.75 mile Riverwalk along the DuPage River. Lots of hotels in this area.

Elgin: A popular residential area northwest of Chicago, with lots of museums and historic buildings. Cluster of hotels off I-90.

Oak Park: Along with nearby Cicero, this is one of Chicago’s most afflient residential areas, with pretty streets and noteworthy architecture, including several Frank Lloyd Wright homes. There are a few hotels in town.

Schaumburg / Hoffman Estates: This heavily populated northwestern suburb is best known for shopping and eateries at the Woodfield Mall and Legoland Discovery Center. Nearby Hoffman Estates is a huge center of business and corporate offices, including Sears Holdings, AT&T, GE Capital, and Liberty Mutual. Big cluster of hotels between here and Arlington Heights.

Itasca / Elk Grove: These neighborhoods on the west side of O’Hare airport are major centers of industry, housing Fortune 500 companies and numerous corporate offices. Many hotels in proximity to the airport.

Arlington Heights: A major residential area with many corporate offices north of O’Hare airport, Arlington Heights also has a big food and shopping scene. Hotels are mostly west towards Schaumburg.

Oak Brook: This high-end residential neighborhood west of Chicago also hosts lots of businesses. Nearby Elmhurst is a cute residential area brimming with eclectic culture. Many hotels in the vicinity of I-88.

Rosemont/O’Hare: Because of it’s proximity to the airport, this area is comprised mostly of hotels.

Joliet: 30 miles southwest of Chicago, Joliet is a large residential area with attractions ranging from a local history museum to a speedway. Hotels are mostly off I-80 or Rt. 30.