The Best Places to run in Huntville, Madison, and Nearby Areas 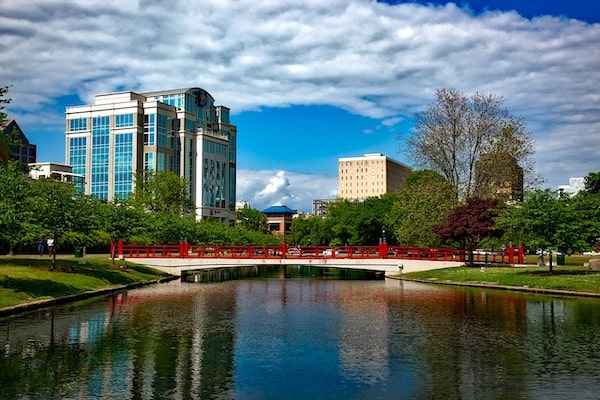 Huntsville, located in the Appalachian region of northern Alabama, is Alabama’s second largest city. It is situated in the Tennessee River Valley, partially surrounded by the Cumberland plateau and several large hills. Huntsville is a fast-growing city, with the second largest research park in the United States, anchored by the US Space and Rocket Center, Redston Arsenal (a large military installation), and offices of  high-tech/life sciences firms. There are terrific options for running in Huntsville, and an active running scene. Highlights include nice residential areas near downtown, numerous greenways, John Hunt Park, and trails at Monte Sano and other preserves. Our special thanks to Jeff Plain for his help with this Huntsville running guide!

If you’re staying near downtown, we recommend running in the attractive residential neighborhoods of Five Points, Twickenham, and Blossomwood. Just south of downtown is John Hunt Park, which has running paths and a popular cross-country course. For off-road running, we love the Aldridge Creek Greenway, and toward Madison, the Indian Creek Greenway and Bradford Creek Greenway (all of which are paved). We’ve also pointed out the best spots to run for those staying in the Research Park area. For trail runners, there’s something for of all abilities at Monte Sano and the Land Trust of North Alabama properties, which include Hayes Nature Preserve. And for run, do a ‘pub run’ from the popular Campus No. 805 and Stovehouse, located just west of downtown!

A car is generally recommended during your visit, although the Huntsville Shuttle (Orbit) runs several fixed routes in the city. Runners should take note of Huntsville’s climate: summers can be very hot and humid, so go early and look for shaded paths. The weather for running in other parts of year is generally delightful.

Some of our favorite runs in Huntsville, AL

One of the most popular places to run in Huntsville. The paved multi-use path runs from Willow... more... 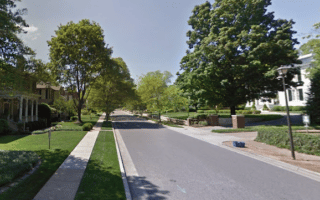 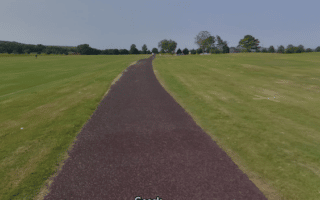 Parks | Trail Running | Iconic Race Courses | Routes With Videos
John Hunt Park is the largest park in Huntsville, and also the site of a well-known cross-country course. The park has 2 miles of pedestrian trails, fields, and other athletic facilities. The cross-country course has numerous loop/distance options.
Explore 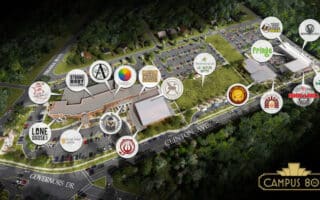 Campus 805 and Stovehouse are hip brewery, entertainment, and event venues located just west of downtown. Our Huntsville friends have put together a few 'pub run' routes starting from this area. Relax with a post-run brew!
Explore 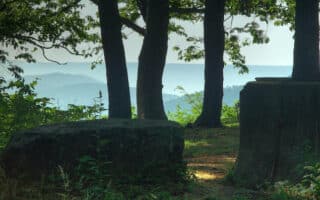 Hilly | Trail Running
Fantastic trail running options surrounding the 1,100-foot Monte Sano, only 2 miles from downtown. The Nature Preserve offers 22 miles of trails, and the State Park has 20 miles of hiking trails and 14 miles of biking trails. Something for all abilities!
Explore 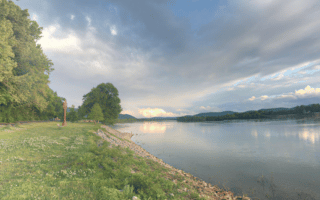 Along the Water | Iconic | Multi-Use Trails | Rails-to-Trails
One of the most popular places to run in Huntsville. The paved multi-use path runs from Willow Park south to Ditto Landing, where the trail continues along the Tennessee River for another mile. Pleasantly shaded, with numerous parks and water views.
Explore 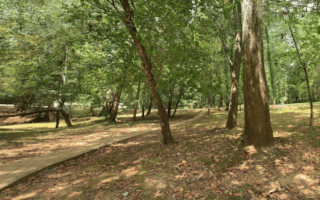 Multi-Use Trails | Trail Running | Rails-to-Trails
The Hayes Nature Preserve, located 10 miles south of Huntsville, is a worth-it destination run. The 10 miles of trails and greenways pass through a variety of terrain, including forestland, some sections along the Flint River, small lakes, fields, and a golf course.
Explore 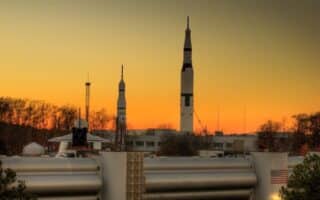 US Space And Rocket Center Area

For those staying in the Research Park area, there are several nice running options: a route around the Space Center, a small trail network, paths around the Botanical Garden, University of Alabama campus paths, and some good options west of HWY 255.
Explore 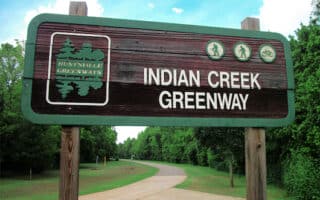 Multi-Use Trails | Rails-to-Trails
A good bet for an off-road run in the Research Triangle area between Huntsville and Madison. The southern section runs for 2.6 miles through Creekwood Park, while the 0.8 mile northern section runs north from Highway 72. Farmland, woods, creek views.
Explore 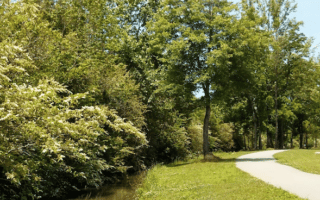 Multi-Use Trails | Rails-to-Trails
The best bet for an off-road run in Madison. The Bradford Creek Greenway is a paved multi-use path that runs for 2.4 miles between Palmer Park and the Heritage Elementary School. Add the Mill Creek Greenway for a 6+ mile run!
Explore

Along the Water | Iconic | Multi-Use Trails | Rails-to-Trails
One of the most popular places to run in Huntsville. The paved multi-use path runs from Willow Park south to Ditto Landing, where the trail continues along the Tennessee River for another mile. Pleasantly shaded, with numerous parks and water views.
Explore

Huntsville has a humid subtropical climate, with hot, humid summers and mild winters. Runners should be prepared for the summer hear, where high temperatures average in the mid-80s to low-90s from June through September. By contrast, winters are mild, with high temperatures in the 50F (10C) range, and lows of just above freezing. Also note the abundant rainfall: 55 inches, evenly spread throughout the year (but mainly through downpours in summer).

There’s an active running scene in Huntsville. The We Run Huntsville site is an excellent source for local races, group runs, and routes.

Good calendar of local running events at We Run Huntsville.