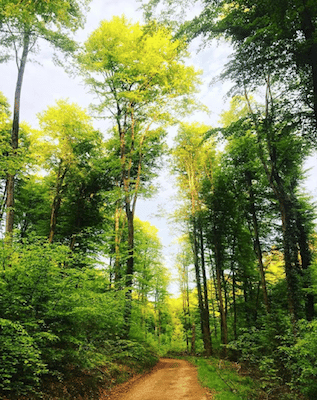 Bambësch is a large recreation spot located less than 5km away from the city centre in the northwest part of Luxembourg City. It includes a wonderful network of forest trails used by hikers, runners and cyclists as well as tennis courts and an awesome children’s playground. Despite being so close to the city centre, the trails are never overly crowded.

Our route starts at the Bambësch car park. It is a nearly 7km ‘perimeter’ loop, not technical but somewhat hilly.  There are also a four way-marked loops ranging from 4.6km to 7.5km, all starting at the car park, plus many other interior paths.