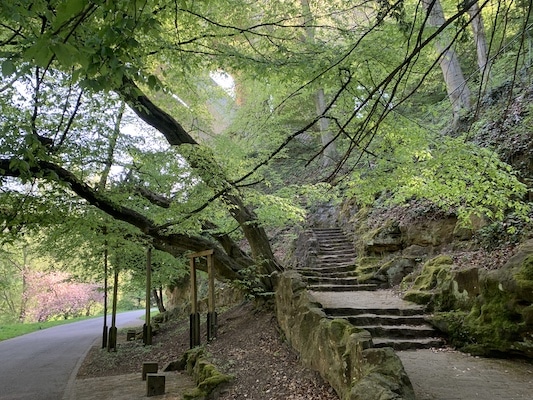 If youre looking to get away from the hustle and bustle of the city and into some beautiful green space, this run is for you. The Petrusse valley parks are a bit of a hidden gem in the middle of the city and they never tend to be very crowded. Highlights include the St. Quirinus Chapel built straight into the rock, impressive fortification ruins and some strange rock formations. Our route is an out-and-back circuit starting on Avenue Marie-Thérèse just off the stone-arch Pont Adolphe bridge. Follow the Rue de la Semois south into the valley, for 1.2 km. Then, come back north along the Petrusse river path. Cross to the other side of Pont Adolphe, and enjoy some of the paths on the east side, passing a skateboard park, and other features.

Longer Run Options: Combine with the “Municipal Park and Merl-Belair Park” route, paths along the Alzette just to the north, or the roads and grounds around Place des Martyrs just to the south.

The PETRUSSE VALLEY PARKS really are a runners dream. I ran as part of a longer run with the Alzette path and municipal parks for 10k.