No Thanks
Saskatoon, Saskatchewan 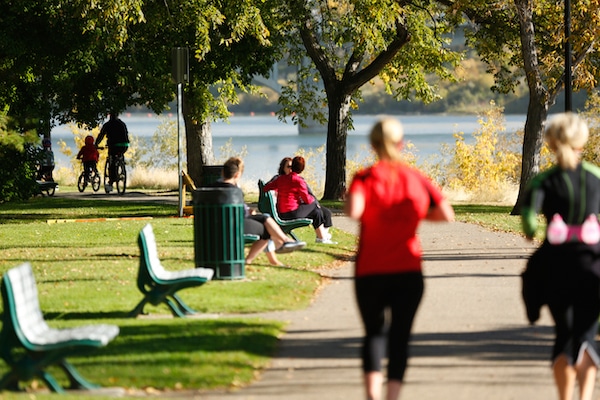 The Meewasin Valley Trail along the South Saskatchewan River is the signature run in Saskatoon. The trail runs for over 90 km in and around the city, on both sides of the river. There are many additional parks and spur options that come off the Meewasin, as well. We’ve mapped a few great running options. For a complete guide to the trail, see this extensive brochure. The so-called ‘urban loop’ is 12 km, from the Senator Sid Buckwold Bridge to the Circle Drive Bridge (Trans-Canada). There are map kiosks along the way.

North Section. From River Landing downtown, this is a loop of up to 19 km, using both sides of the river. It’s a combination of paved and gravel, fairly open, with river views some of the way. Head north on the west side, along a mainly gravel path, to Meewasin Park. Landmarks include Prairie Lily (2.2 km), Weir waterfall/CPR Bridge (3.3 km), North Circle Drive Br./Trans-Canada Highway (4.6 km), and Meewasin Park (7 km). The path through Meewasin Park goes for 2 km. A pedestrian path on the North Circle Drive Bridge/Trans-Canada Highway allows a crossing to the east side (option here: continue north into the Silverwood Park for ~1 km).

Run south on the east side for 5 km. The last 2 km section is a nice path through Cosmopolitan Park and Rotary Park. Note: a marked ‘urban loop trail’ is 12 km from River Landing (Senator Sid Buckwold Bridge) to North Circle Drive Bridge.

South Section. The southern loop is 8 km, starting from River Landing. Head south on the western side of the path, with views of the river a good part of the way, passing through Victoria Park. After 2.3 km, you’ll have to do 1.3 km along Spadina Crescent, to the Gordie Howe Bridge. At the 3.6 km mark, cross the Gordie Howe Bridge to the east side, returning north for 4 km through Diefenbaker Park and Gabriel Dumont Park. Add-Ons: Spurs to Gordie Howe Park, Diefenbaker Park, Gabriel Dumont Park.