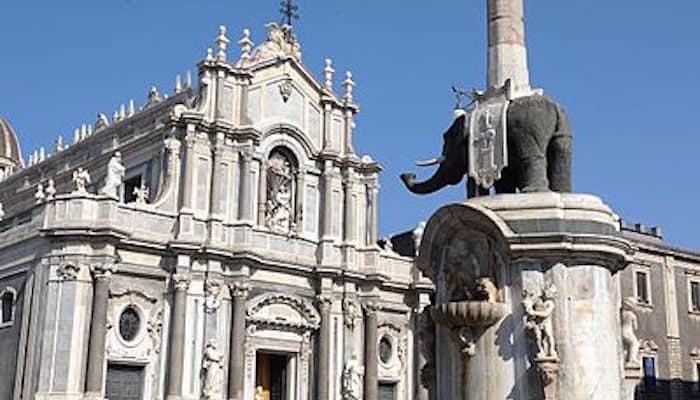 Catania, nestled on the eastern coast under Mount Etna, is the second largest city in Sicily, and an important site of baroque architecture, art, and industry. This UNESCO World Heritage site has fantastic sightseeing, especially when it comes to architecture. Our 8.6 km runseeing tour is a perfect way to check off your must-see list at the same time as your workout. Starting from Catania’s central train station, this route heads west on Via Marchese di Casalotto, then south on Via Monsignor Ventimiglia to Palazzo Pedagaggi. Turn RIGHT on Via Vittorio Emanuele II past Palazzos Bonjuto and Platamone. At the Piazza del Duomo go south through Porta Uzeda and take a RIGHT. At Piazza Federico di Svevia you’ll pass Castello Ursino. Go north to reach Via Giuseppe Garibaldi and follow it west to Porta Ferdinandea. Heading back east on Via Vittorio Emanuele II, swing past the Roman Theater and up Via Crociferi to the Monastero dei Benedettini di San Nicolò L’ Arena. From here, go north into the beautiful Bellina Gardens, for a loop, then make your way south on Via Etnea, which is loaded with architectural attractions. Double back east on Via Vittorio Emanuele II, and when you reach Piazza dei Martiri, use the coastal path to return to the train station.

Just be advised the streets of Catania (like most streets in Sicily) can be narrow and heavily trafficked, and sometimes don’t have sidewalks wide enough for running. The best time to run is early in the morning, or on a Sunday, when things are a little more quiet.

This 6.4 km run hits the top sites in the Sicilian capital of Palermo, including the Norman... more...

The small island of Ortigia (Ortygia) is a must see when visiting the Sicilian provincial capital of... more...