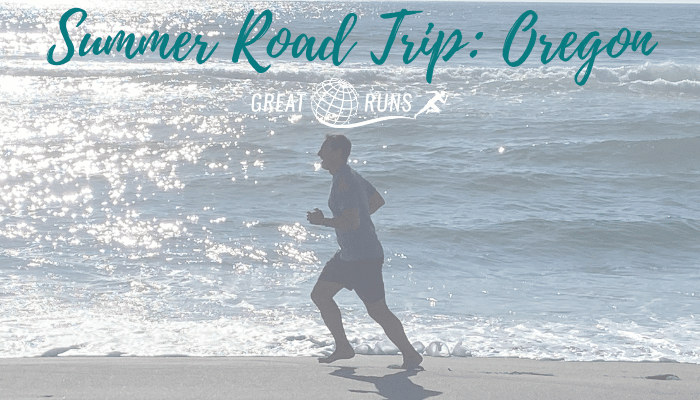 Great Runs just finished a fantastic two-week road trip to Oregon, which included some 200 miles of running, walking, hiking, and cycling. What a wonderful state, and such a diversity of geography! Our itinerary: four days on the coast, three days in the Willamette Valley (farm and vineyard country), four days in and around Bend, two days at the edge of the High Desert, and two days at Mt. Hood. We thought the GR audience would enjoy this brief slide show, featuring pictures of some of the running and hiking highlights.
Oregon Coast

Spent the first four days on the Oregon coast, near Depoe Bay — the world’s smallest harbor! This is the Haystack at Cape Kiwanda. SEE THE ROUTES.

For a unique workout, runners can run up and down the sand dune at Haystack Beach. SEE THE ROUTES.

The author running on beach at Cape Kiwanda. Local cherries were a treat! Also, apricots, which are a totally different ballgame when eaten at the source.

We found great coastal views on this hike at Cape Perpetua.

From the coast, we drove inland to spend two days in the southern Willamette Valley. Rented bikes in Corvallis, for a ride past farms and vineyards.

A pilgrimage to Pre's Trail in Eugene, celebrating the legacy of Olympian and Oregon track legend Steve Prefontaine. There were lots of runners... SEE THE ROUTES.

A disappointment: Also in Eugene, 'Track Town USA': We wanted to run the track at legendary Hayward Field, site of the U.S. Olympic Trials two weeks earlier. But this newly renovated facility on the campus of the University of Oregon is closed to the public. SEE THE ROUTES.

Spent the next four nights in Bend. Just outside Bend is Smith Rock State Park. We hiked the gorgeous but steep Misery Ridge. An easy trail run is along the River Trail. SEE THE ROUTES.

The author's wife at Smith Rock. We had a wonderful sunset picnic dinner.

The Deschutes River Trail is one of the running highlights in central Bend. SEE THE ROUTES.

The Old Mill area along the Deschutes River Trail. Great parks and views of paddlers in the only rapids I've ever seen in a city's downtown.

Combine the Sun-Lava multi-use trail with Trail of the Molten Land, a paved path meandering across a basalt lava flow to a viewpoint. SEE THE ROUTES.

The Lava Lands routes can also be combined with a 1.5 mile ascent up Lava Butte for views of the Cascades and the Newberry Caldera.

Drove east to Mitchell to see the John Day Fossil Beds National Monument: home to one of the largest collections of fossils in the world. Gorgeous sunset run in the Painted Hills.

A gorgeous run just outside Mitchell, OR, part of the 'Oregon Scenic Bikeway.'

Spent two nights at the Timberline Lodge on Mt. Hood. Hiked about 10 miles of the 39-mile Timberline Trail. Beautiful wildflowers!

Vineyard bike ride through the northern Willamette Valley. Mid-way stop for lunch and a wine tasting. 98 degrees, wine, height of day...safe to say no PRs set on this bike ride!

Carbs were on order on the last night in McMinville, which is located in the Willamette Valley about an hour south of Portland. Early morning run at Joe Dancer Park in McMinville, before heading to the airport