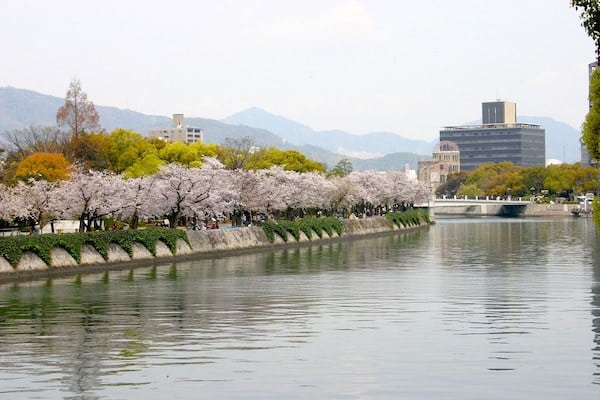 The path along the Motoyasu River provides another in a series of riverside running options in Hiroshima. The Motoyasu sits just west of the Kyobashi River. The better developed path is on the east side, the most seamless section being the 4 km from just south of Heiwao Bridge/Peace Blvd. to Dejima/Highway 3. The path alternates between being at street level above the river, and some sections below street level along the river, with surfaces ranging from dirt to stone/concrete. There are a couple of spots where the path temporarily ends for a road crossing. There’s a good pedestrian path on the Ujina Bridge, which has great views.

Loop and Additional Options: Rather than a straight out and back, a couple of options. For a loop, you can use the path along the western side of the Motoyasu, using the bridge at the 2 km mark, just south of Senda Park, which itself is a nice diversion with ~1 km of jogging paths. You could also loop back north along the Kyobashi River path. And, for a longer run, our Hiroshima Minato Park/Ujina Island route starts just south of the southern end of the Motoyasu path. Just north of the northern end of our path are our routes involving Central Park, Peace Blvd., and Peace Memorial Park.

Pleasant path along the Kyobashi River goes for 3.4 km from the Miyuki Bridge, north to Shukkeien... more...

A pleasant seaside escape just south of central Hiroshima and a great spot for a run. Our... more...