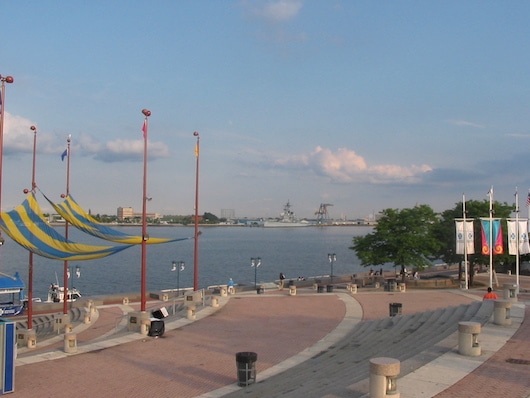 Two states, an iconic bridge, river paths, and tons of history — all in one run! The Delaware River is adjacent to Philadelphia’s historic district and separates Pennsylvania and New Jersey. It’s connected by the Ben Franklin Bridge, a 1926 suspension bridge & city landmark featuring a popular walking/biking path with skyline views. We’ve mapped two separate routes: one incorporating the 2.5 miles of paths on the Philadelphia side, and another featuring the 1.5 miles (each way) over the Bridge, and ~1 mile of riverfront paths in Camden on the New Jersey side. The routes can be combined for a longer run. NOTE: Shorten the run by using the RiverLink Ferry between Camden and Penn’s Landing, which runs in season.

Philadelphia Side: (5.5 miles out and back, 168 foot gain). There are riverfront paths paralleling Christopher Columbus Blvd. for ~2.5 miles between Pier 24, south to Pier 68. The nicest section, with great water and bridge views is the 0.5 mile pier from Penn’s Landing to the Spirit of Philadelphia. The other sections, have occasional water views and can be a bit gritty.

Ben Franklin Bridge and New Jersey Side. (6.6 miles out and back, 168 foot gain). Access the Bridge from N. 4th St., near Franklin Square. It’s ~1.5 miles over the bridge. Egress to Camden on N. 3rd St., and make your way down to the water using Pearl St. There’s about 1 mile of waterfront running, incorporating the Camden Waterfront, parks, and Aquarium. Note there are two climbs on the bridge.