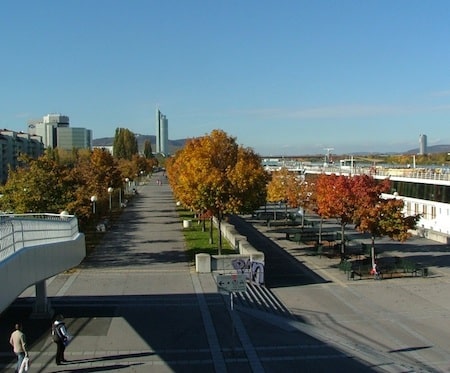 There are three primary waterside running options in Vienna: Along the river, on Danube Island, and along the Donaukanal. This is a pleasant run along the river paths, starting at the Hilton Vienna Danube Waterfront to the south. It is possible to run on either the western or eastern sides, with a good part of the path below the road, making for a quieter run. There are numerous bridges for crossing over the river, to make a nice loop — either on the east/west path or on Danube Island (Donauinsel). A good 5k loop is between Reichsbrücke and Millennium Tower, and then add an extra km or two in Donaupark, a large park with rose, lily, herb & moorland gardens, a lake & 250m tower on a former landfill site.

Distances, starting at the Hilton Vienna on the western side, from south to north:

Add-Ons/Variety: Many opportunities for add-ons, especially Donaupark on the eastern side, the 20km of paths on Donauinsel.