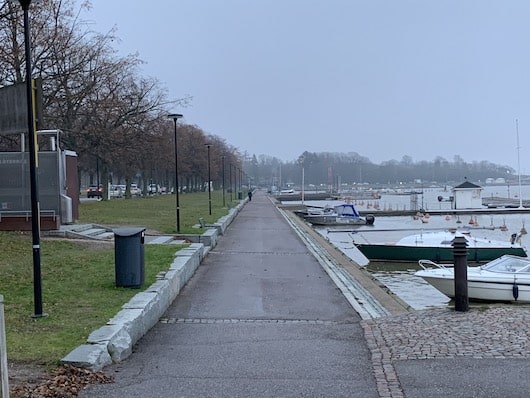 This run is focused specifically on the waterfront area and Kaivopuisto (park). It’s near the ferry terminals, and is a great option if you’re staying at one of the waterfront hotels such as the Radisson Blue or the new Clarion. It’s also incorporated in our longer ‘runseing tour’, as the area is only 1.5 km from the City Center. The paths are well lit, so can be run in the dark. Note: As of winter 2019, there is construction in the area, forcing some pedestrian detours around some of the waterfront paths.  Puisto=park

The run is mainly along waterfront paths, starting near the Helsinki Paddle Center (near the Clarion Hotel). Run northeast along waterfront paths for about 3 km. Great views, and a tour of a tiny island that has a restaurant on it. For the return, we recommend a run through Kaivopuisto, a lovely park with numerous paths, including some small hills offering views to the sea & nearby islands. Then, complete the loop along the paths of Meripuisto (park), with views of some nice older buildings on the right.

Longer Run: This route is also incorporated in our Helsinki ‘Runseeing’ Tour. Can continue north along the water (rather than turning into Kaivopuisto), through the Tähtitorninvuoren puisto, to the Esplanade area.