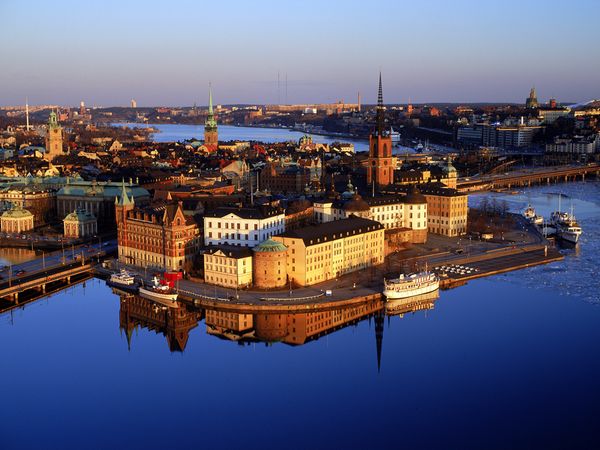 The most populous city in Scandinavia, Stockholm is one of the world’s most beautiful capitals. It’s built on 14 islands around a medieval city center and is located where the freshwater Lake Mälaren flows out into the Baltic Sea. Running in Stockholm is a treat, given the water, unique geography, and well laid out pedestrian and recreational paths. The Stockholm Marathon is among the most beautiful marathon routes in the world.

We’ve designed three routes in central Stockholm, featuring the city’s unique geography and important sights, that can be mixed & matched: ‘Runseeing‘ Tour, Kungsholmen, and Södermalm. Djurgården is Stockholm’s most popular recreation area… and is 3x the size of Central Park!  Hagaparken is another nice park for running. East of the city, there’s nice running on Lidingö and the Hellasgården area. In southern Stockholm, there’s nice running around the Skärholmen area waterfront and inland forest paths. Head just west of Stockholm for a run on the gorgeous grounds of Drottningholm Palace, which can be combined with Judarskogen Nature Preserve for a longer route!

Stockholm has an excellent public transportation system consisting of bus, tram, local train (pendeltåg) and subway (tunnelbana; look for a T-sign). Runners should note that the weather can be unsettled at any time of year. Winters can be cold, but paths are usually well- maintained and lit to compensate for the short days.

Some of our favorite runs in Stockholm, Sweden

A 10k “runseeing" tour” of Stockholm’s main sites. Much of the route is along the water and... more... 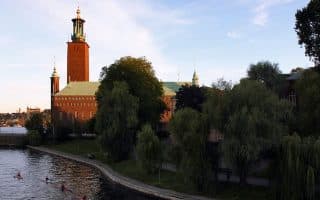 A residential island where the spectacular City Hall is located. Mostly along the water. Highlights include a beautiful park, an inner city beach, and Hornsbergs Strand. Add the 2 km loop around Lilla Essingen!
Explore

An 11.5 km loop of this island in south Stockholm. Many lovely sections, much of it along waterfront paths. Great views of the water, and other Stockholm islands.
Explore 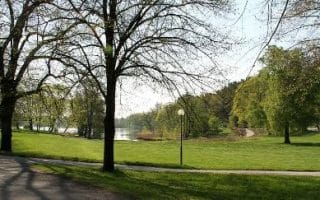 A lovely green park about 5 km north of the city, popular for running. There are several scenic running paths, including a loop around Brunnsviken lake
Explore 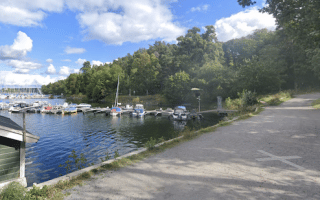 A nice run on the eastern side of Brunnsviken Lake, combining a Botanical Garden, paths along Bockholmens marina & Lappis Beach, and the University of Stockholm campus. Part of the route overlaps with our Hapaparken route.
Explore 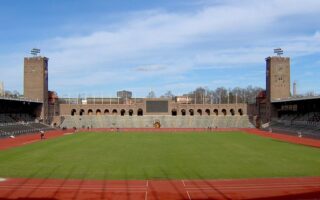 A great run in central Stockholm with lots of variety. Combines the 1912 Olympic Stadium, the 3k Lill-Jansskogen off-road trail, beautifully landscaped Humlegården, and other small parks and bike paths, for a route of up to 12km.
Explore

Nice running on the island of Lidingö, the self-proclaimed 'health island'. We've mapped a route over the bridge and along the waterfront, and another one on forest paths at the northern end of Lidingö.
Explore

A nice recreation area offering several running trails in the woods and along the Källtorpssjön lake. It is located about 20 minutes by bus from downtown Stockholm. Numerous other recreation facilities, and a lakeside cafe.
Explore

In southern Stockholm, there's some pleasant and easy trail running in the Skärholmen area. There are some trails near the water, some interior trails, and even more at Vårbergstoppen Park. Mainly wooded.
Explore 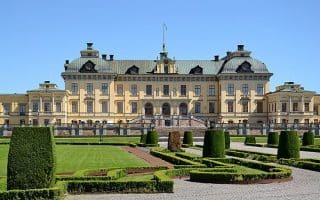 Drottningholm Palace is a great spot for a destination run, with beautiful grounds and gardens. Also in the area are nice wetlands trails around Judarskogen Nature Preserve and forest trails of Kärsön Island.
Explore

A residential island where the spectacular City Hall is located. Mostly along the water. Highlights include a beautiful park, an inner city beach, and Hornsbergs Strand. Add the 2 km loop around Lilla Essingen!
Explore

One of the defining elements of running in Stockholm is its latitude. In summer, running late at night is a particular treat due to 18+hours of daylight. In winter, Stockholm makes up for short days in part by providing good lighting along most of its paths. Despite its northern location, Stockholm has relatively mild weather compared to other locations at similar latitude, or even farther south — receiving more sunshine per year than Paris or London, but also precipitation on about half the days through the year. It can snow from November to April, and winter running will likely involve snow or ice so bring your Yak-Traks. Summers are mild but rarely warm. You’ll almost always need an extra later for morning runs, even in July.

Stockholm has a wide selection of hotels in the downtown area and all of our iconic routes are located within a few mile radius. To have a fast access to the Stockholm Highlights loop, Djurgården and Södermalm routes, look for hotels in Östermalm and Gamla Stan areas. If you want to stay closer to Hagaparken route, then the Vasastan is a good option. It is still very close to Central loop and Södermalm routes, but a bit further from Djurgården. In addition to big international chains see also the following options:

Löplabbet is another running specialty store with knowledgeable staff.

XXL. Price-driven big box retailer which has disrupted Scandinavian sporting goods retailers recently. One location in downtown on Hamngatan, another in Bromma airport.

Run With Me Stockholm offers a variety of private guided running tours covering main sights and attractions of the city. Has free group runs, too.

Stockholm Running Tours is another group combining sightseeing and running.

Hash House Harriers is a Stockholm chapter of this globally spread “Drinking club with a running problem”. Meets every Wednesday night and every second Saturday afternoon for running, beer and fun.

Stockholm Frontrunners is running and walking group for LGBTQ people and their friends. Meets every Tuesday for group runs.

Stockholm Marathon is the main marathon race in the city, taking place annually late May or early June. Consists of two loops around the city and the finishing line is located on track of the Olympic Stadium.

Stockholm Half Marathon. September. This race has been in its current form since 2007 but its roots date to the 1920’s.

Midnattsloppet. August. The “midnight run”, is a 10k race which has been run in Stockholm since 1982. As the name suggests, around 20,000 runners hit the streets of the city after the sunset. The same event is organized annually also in Malmö, Göteborg and Helsinki.

Women’s Health Half Marathon is the biggest half marathon exclusively for women in Europe. Offers also a possibility to run as a pair and split the distance with your friend. Website available only in Swedish — to learn more in English, contact whhm@marathon.se