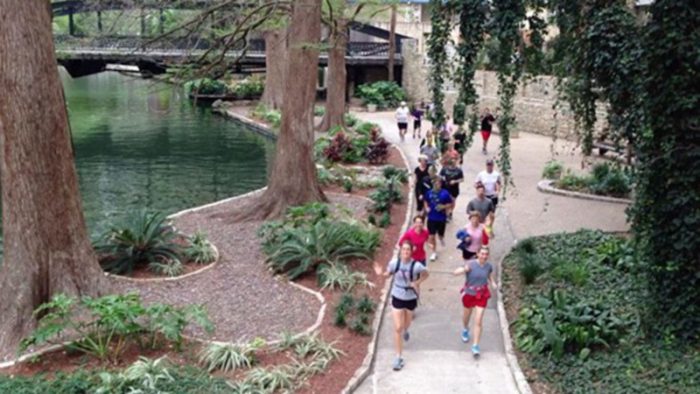 The River Walk is the largest tourist attraction in San Antonio, larger than even the Alamo. In the early 20th century, a flood along the San Antonio River caused massive damage to the area. In the years that followed, efforts were made to prevent the flooding including the construction of the Olmos Dam and a bypass channel. In time, the River Walk was constructed, revitalizing the San Antonio downtown area. Today, boat tours, bars, restaurants, and hotels are found along the route.

The River Walk itself, plus a couple of extensions, goes for some 15 miles. We’ve mapped out a 6 mile loop incorporating the central downtown potion of the River Walk. See also the map of the entire River Walk. Our route starts at Tico’s Bar, but runs along the River Walk can start anywhere. Some hotels have basement entrances that open onto the walk. Running north along the paths, this route will take you past The Tower of the Americas, The Alamo Mission, La Villita Historic Arts Village, the San Antonio Museum of Arts, and across the convergence of the many metroways crossing the city.

Add-Ons: See the map for additional sections of the River Walk, and some parks and neighborhoods off the main trail that are fun to explore on foot. The King William neighborhood has some nice streets and interesting homes.

Part of the southern extension of the River Walk, this trail runs by the 18th century missions,... more...