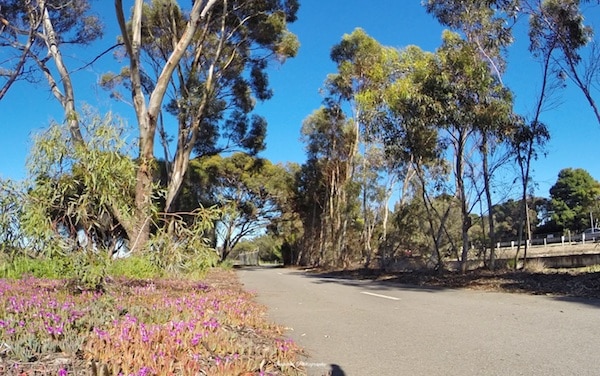 This series of three interconnected trails near the airport offers some variety and is popular with commuters. The Reece Jennings Bikeway, Anna Meares Bike Path and Captain McKenna Pathway are well signposted, paved and relatively flat. The trails are a mix — meandering past parklands, lakes, and grassy open space, but also some industrial sections and the busy airport area.

Starting from the trails’ most north-east point, the Anna Meares Bike Path (named after the local Olympian), is a 1.7 km one-way trip from IKEA and the airport terminal (northern end of Frank Collopy) to Tapleys Hill Road where it connects to the Reece Jennings Bikeway.

The Reece Jennings Bikeway, named after a former local council mayor, is a 4 km one-way trip south from the River Torrens in West Beach to Glenelg North. At the south most point you can join the Captain McKenna Pathway (after crossing Tapleys Hill Road). Note: 1 km of the path is along the shoulder of a major road, so not too  pleasant.

The Captain McKenna Pathway is a 3.9 km one-way trip from the intersection of Tapleys Hill Road and Warren Avenue/James Melrose Road. It follows the airport’s southern boundary fence east where it terminates at the Beare Avenue playground. Good for plane watching!

Add-Ons/Variety: Coastal trail and some of our other routes near Glenelg such as  Patawalonga Lake.

A paved 5.8 km path around this picturesque lake north of the city, adjacent to gorgeous lakefront... more...