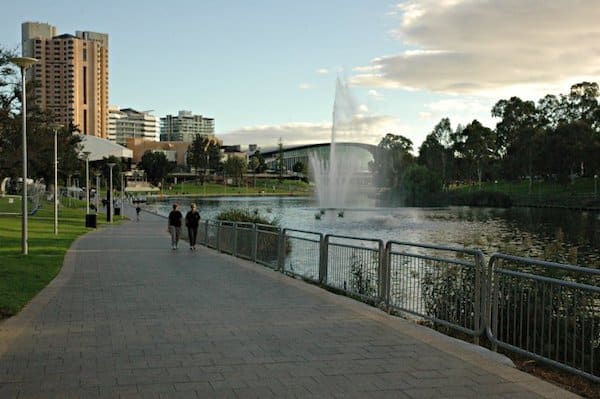 Within the complex of 27 parks that form Adelaid’s Park Lands, there are two distinct, smaller ‘loops’ that are popular with runners: University Loop in Park 10, and the Victoria Park Loop in Park 16, 3 km apart and connected via the Park Lands Trail running through the Botanic Garden.

University Loop: The frypan shaped loop is a popular location for early morning run and fitness groups. Located between Mackinnon Parade and War Memorial Drive (1 mile from the CBD), the unsealed 2.2 km (1.4 mile) circuit of ‘Park 10’ has distance markers every 200 meters. However, don’t assume ‘unsealed’ means ‘smooth’, the gravel surface includes some, so keep an eye out!  The loop is tree lined, which is helpful durong Adelaide summers. If you are after a full body workout, the circuit features a series of fitness stations with outdoor full body workout equipment.

Victoria Park Loop: Also known as Pakapakanthi, or trotting, from an extinct language spoken by the Kaurna peoples of the Adelaide Plains in reference to the park’s past use as a horse track, Victoria Park is characterised by vast open space and views of the Adelaide Hills. Only a short walk from the CBD, the park attracts office workers during peak times so keep in mind it can get busy. The loop is 2.1 km (1.3 miles) which runs from Wakefield Street to Greenhill Road and back again. Four fitness stations can also be found on the loop.

For a fun challenge, the ‘Sweat Course’, on the East Terrace side of Victoria Park, is a flat, 600m linear track with eight fitness stations for a full body workout. You have the choice of running on either grass, gravel or a paved track.

Memorable 18 km trail forming a perimeter around and through 27 parks in north and south Adelaide.... more...