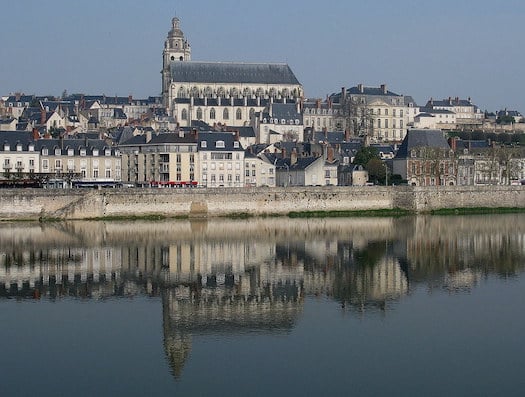 Located between Amboise and Orleans, Blois is another picturesque hillside town in the Loire Valley, known for its gothic cathedral and impressive Château Royal de Blois. There are also extensive levée paths on both sides of the Loire River — great for a longer-distance off-road run. We’ve put together a ~9 km ‘runseeing’ tour of Blois, hitting major site, a couple of small parks, and a section of the Levee paths.

Start at the tourist office near the Château, and enjoy ~1 km around the grounds. Then head toward the river, and get the heart rate up on the Escalier Dens-Papin (stairs). Run east along the river promenade (quai) & Levée des Tuileries for 1.5 km, to the D956 bridge. Continue east to Parc des Mées, which has some nice paths and a loop around some fields. Come back down to the river and come back west along the Levée de Loire, cross over the D956 bridge, and return to town on the Levée path along the south side of the Loire.

Option: From the river, take the hill stairs up to the Blois Cathedral, and run along the Jardins de l’Évêché, which features great views of the city.

Add-Ons: Levée path on north side of the Loire River extends for 10+ km east, and for 18+ km east on the south side.

Pro Tip: Great spot for a post run drink is at the end of Jardins de l’Évêché.

A run that has it all: paths along the Loire River, the grounds of three castles, historic... more...

Paths along the Loire River extend in both directions from the city's historic center, featuring wonderful water... more...