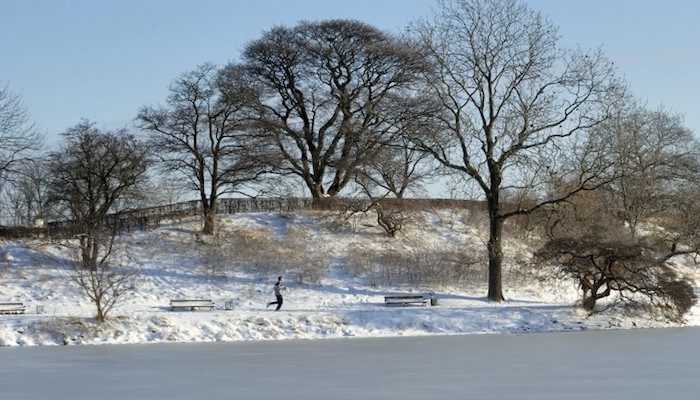 This is a great run in two adjoining neighborhoods, just over the bridge from Nyhavn. It’s a combination of waterfront running, some important Copenhagen landmarks, and exploring a new neighborhood.

Start just over the Langebro Bridge, near the Christianshavn St. metro station (an Inner Harbour pedestrian bridge is planned). Christianshavn is on the island of Amager and the area is dominated by canals. Run along the Rampart of Christianshavn (Christianshavn Vold). Opportunities to run on top, and in & out various paths here. Stay along the water, canals on either side, through the self-proclaimed autonomous neighborhood of Freetown Christiania, where you’ll no doubt catch the unmistakable waft of weed. The area has an interesting history. Run along Refshalevej, a small road with canal on the left. At the Celebracao performing arts theater, left on Kongebrovej, then left again toward the modern Copenhagen Opera House. There’s a wonderful waterfront run around this landmark. There are other conservatories and arts related institutions and schools in the area. The final part of the run is along the water, canal on your right. Pass by the Copenhagen Street Foodmarket, Church of our Saviour with its corkscrew spire, back to the metro station or start of the run.

Notes: Lots of new bridges/construction in the area, so it’s constantly changing. Also, one can use the prevalent ferry service to shorten the run.

Is it true that Christiania has a rule of no running through their community or is that not true anymore?

Hi Amy – Here’s the word from our local in Copehnagen about running in Christiana: “both yes and no. You can easily and safely run on the backside of Christiania, and along the moat. However, through the very centre and especially Pusher Street is a very big no go”. I will amend the route to reflect that.
– Mark