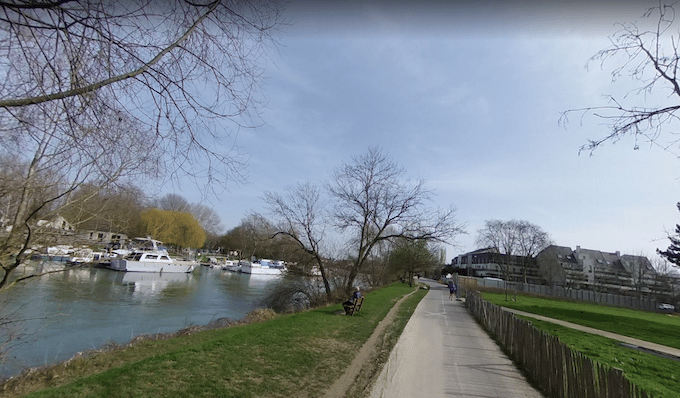 In the Le Perreux-sur-Marne commune in the eastern Paris suburbs, there’s series of quay paths along the River Marne. It’s a great opportunity for a longer off-road run that can be joined from a number of areas. There are paths on both sides of the river, with some bridges that can be crossed to form loops of various lengths. We’ve mapped 18 km to Chennevières-sur-Marne, on the south/east side. There’s fresh water and restrooms along the way. Our thanks to Antonio Martinez for the route suggestion!

The northern end of the route starts in Gournay-sur-Marne. There are nice views of the water and also some nice shade, in a generally quiet area.  Toward the northern end, there are additional paths in Parc départemental de la Haute-Ile. At the ~10 km mark, Parc de Tremblay makes for a nice little detour, and at 13 km, a good connection to the Bois de Vincennes. From there, the path continues for several additional km to Chennevières-sur-Marne.

Add-Ons: There are quai and canal paths to the west of Gournay-sur-Marne, leading to the Vaires sur Marne boat basin and the Château de Champs-sur-Marne grounds. It’s also a nice add-on to a run in the Bois de Vincennes.